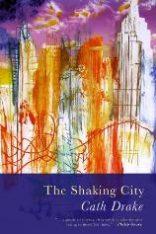 Cath Drake’s thought-provoking collection is divided into three parts: “The Shaking City”, “The Glasshouse” and “Far From Home” – the last of which is inspired by her native Australia.

In her first poem, “Sleeping in a Shaking City”, Drake starts with quite an assertive tone ‘I’ll tell you how there is one chair then another’ and ends with a couplet including ‘there must be somewhere in this town that does not shudder’. This poem sets up a questioning of the foundations of our lives which threads through the first part of the collection. On the one hand, poems feature domestic details of houses and furniture and on the other hand, we are taken into the surreal. In her second poem “Furniture”, the furniture seems to take on a somewhat chaotic life of its own. This is all in the context of ‘a tower block of a city that is shaking’.

Drake excels at drawing lively portraits in “Shaky School Album”, a sequence of fourteen poems linking back to childhood, school days and teenage memories. Each poem is a vignette crafted around one interpretation of shaking. Interestingly the poems are almost all different lengths ranging from eleven lines to eighteen lines. This seems to reflect the slightly chaotic nature of that time of life. It is as if she riffs off the word ‘shaking’ in this sequence. At five years old, she might be waiting for ‘the shaking inside me to rattle open’ in “A Corner Block Vigil in Cowboy Hat”. In “Mousey’s Mansion” she realises the way she and her friends ‘shook/our energy all over the place’ was not a meaningful or lasting life passion. In “Born with it”, she reflects on ‘the glow’ of a fellow schoolgirl who still glows with good deeds, three children later, saying ‘she’d make us all milkshakes with a melting smile’.

“No-Shake Mohawk” is a wonderful description of a bit of a rebel – ‘it was/as if he was wearing a swear word’ – who we hear becomes a ‘crisis manager’ as an adult. And in “Middle Age Karma”, the narrator remembers a school ball:

Interspersed with what I will call Drake’s ‘shaking’ poems, there are poems which raise environmental concerns. “How I Hold the World in This Climate Emergency” is an example. Drake uses physical images here to reveal how she feels: ‘Sometimes I am bent over with the sheer weight of the world’. Her repetition of ‘sometimes’ at the start of each stanza drums home the way environmental concerns pervade her being:

“Dhanakosa, Scotland”, on the other hand, comes across as a celebration of nature. Drake describes the scene of a loch and moorland. The mist is ‘sprawled across the armchair/ of the hilltops’ and she writes of how the mist ‘made the impossible seem possible, opposites visible.’ I feel this is a seminal line in the collection: Drake often re-engineers what we might see and explores the unexpected turns inherent in life. The next poem “The Flowers of our City” also celebrates nature, in this case the flowers which bloom in odd places in the city, but touches on despair, without explaining anything more.

In the second part of the collection, Drake includes a range of prose poems. Furniture is featured again in ”Rolodex”, in the form of ‘old-style dark jarrah desks’. This poem becomes rather surreal with a possible ghost and the sight of her ‘name and number in thick marker pen and capital letters’.

I very much enjoyed “Party Invitations” which captured the angst involved in throwing a party. The sentences ‘The three desirable people huddle and when you turn around they’re gone. You wonder how this will affect your social standing.’ sum up the fragility of the narrator’s social life: what seemed possible (a successful party) has become impossible.

The sonnet “A Man my Father Played Golf with’ uses striking imagery. Alliteration and assonance to describe Mr Harris who

“The Circle Line”, in quatrains, beautifully captures an unending journey. There is very little punctuation and each stanza has enjambment with the first line of the next stanza, keeping the flow of the poem continuous.

The third section of the collection has a number of poignant poems. “The Before” tells of a grandmother’s memories of meeting her loved one in 1925; the memories are held inside a jarrah box, how he was ‘before the shrapnel ate him away’. “The Clock in Aunt Anna’s Lounge” has a clock almost built into the structure of the house, which comes to life: ‘It knew your private ghosts by name’. It is witness to family history but also to grief in the last stanza.

Creatures play a surreal role in this section. “The Drake” (which of course alludes to the poet’s name) has a wonderful first line that draws the reader in : ‘Now that I think about it, there was always a swampy smell’ . The drake is an imaginary companion, but one who often gets in the way. There are two poems involving a bunyip – a mythical Australian creature who is said to live in swamps. The imaginative “Bunyip in the Kitchen” brings ‘shaking’ back into the picture:

“Bunyip on the End of My Bed” delivers an environmental message about ‘three hundred millions of tons’ of plastic, in the guise of a the bunyip telling his own kind of bedtime story. This is typical of the slant way that Drake brings in serious messages. In “When the Insects Disappeared”, the poem charts the increasing silence and shortage of foods. The poem ends with ‘There didn’t/ seem to be anyone answering back.’

Drakes speaks of more than one world in “Rubber Dinghy with Glass-bottom Bucket, Rottnest”:

I feel this describes exactly how we can enjoy the vibrant poems in this collection.