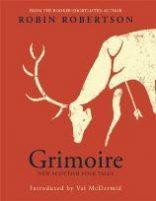 The hardback of Grimoire is a physically beautiful production on cream paper that harmonises with the colour scheme of the dust jacket. It’s illustrated by Tim Robertson with silhouette drawings that combine expressive delicacy with often disturbing power. They both support and complement the text, in a way that isn’t always true of books which combine poetry and pictures. My concern here, though, is with Robin Robertson’s words and their own highly distinctive power.

A ‘grimoire’ is ‘A manual of black magic supposedly used to cast spells, invoke demons etc,’ (SOED). Robertson’s book isn’t a manual in form – its subtitle is New Scottish Folk Tales – but he gives imaginative life to demons and other dark powers by the vividness of the tales he tells.

We feel his narrative power from the first. “Through the Struan Door” begins ‘There is the story of a boy, fetched from the water’, and we’re hooked, in the most elementary way, by the promise of a story, the mystery that hangs around it, and the elemental nature of the counters – ‘a boy’, ‘the water’. Then of course Robertson has to maintain momentum and he does so brilliantly, sweeping us through a rapid series of startling events. The boy angers a witch by accidentally drinking from a potion he’s making for her; he flees her through a series of transformations, each of which she counters by a transformation of her own. Finally he tries to hide as an ear of corn. She turns into a rat and eats him but instead of dying he impregnates her. She carries him for nine months, planning to cut his throat when he’s born, but he’s too beautiful to kill so she pushes him out to sea in a leather bag in a coracle. Almost every line brings a twist in the chess game of transformations till we hit this wonderful modulation from action to emotion and reflection:

The words are simple but the phrases sing and resonate in our imaginations. In the second to last of those lines the boy seems to have become not only a bard but a natural force, like the sea or the wind. ‘Being strong is being many’ develops the suggestion that the boy has entered the multifarious life of nature itself, and links poetic power to the power of metamorphosis, taking on many forms and living many lives. A note tells us that the tale is based on the Welsh story of the bard Taliessin. Someone who’s read Robertson’s other books will also see a link with Robertson’s interest in Proteus and Dionysus, the shape-changing, unkillable nature god who makes a series of unforgettable appearances in Hill of Doors.

Though there’s much here for the mind to feed on, Robertson leaves such thoughts to the reader. Grimoire’s grip on the imagination depends on ellipsis and inconclusiveness, what the author leaves out as much as what he puts in. There follows an asterisk and an unexplained shift to the first person – ‘My doors swing open’. The speaker looks in a mirror and sees himself changing to a goat. Is this the boy, now bard, speaking, or the author of the book? Are all three in a sense the same? Again, the reader must decide. Then there’s another gap and the same or another speaker says

Here, surely, the speaker clearly expresses the idea that the story teller is a kind of sorcerer invoking mysterious powers he doesn’t fully understand, and hints at ideas about our human nature that bear much reflection, though again he leaves the reflection to us.

Witches, demons, darkness. The world of the book is sombre and bloodstained. Driven by violent hungers, passions and dreads, its actions revolve around mutilation, murder, rape, castration, and often involve the intervention of dangerous, inhuman beings. Sexual relations are almost all predatory and abusive. These things are recorded not with overt horror but flatly, as if they simply had to be accepted as how things are. This world is not exactly loveless – it’s full of pity of a largely unstated kind – but the clearest love shown is the instinctive, almost animal love of the mother for her children in “At Roane Head”. ‘Roane’, the glossary tells us, is an Anglicisation of the Gaelic word for a seal. In that story a mother gives birth to four beautiful but ‘wrong’ sons, simple-minded, apparently wordless, crippled on land, fine swimmers in the sea. After some years her husband kills them. Her grief is presented with devastating simplicity –

She seems to take revenge on her husband, though we’re given no details. At the end of the story the narrator says

Here two surprises are sprung: the narrator is apparently a selkie – a creature that can change between human and seal forms by putting on or taking off his skin as a seal – and he himself is not the bystander he seemed but intimately involved in the story he’s told, the father of the boys. This revelation leaves fresh uncertainties. In traditional folklore, you can prevent a selkie from returning to the sea by hiding his or her skin. Has the woman detained this selkie unwillingly by doing that? The way we learn almost nothing of the selkie’s own feelings, beyond his pity for the grieving mother, is typical of these tales. As in early folk tales or ballads, we’re given the bare facts of what the characters do and say, not taken into their individual minds. The effect is to make not only the characters who suffer but even those who act violently seem in some fundamental way passive, as if they were fatally programmed to do what they do, rather than in any real sense acting out of choice and decision. And again it nudges the reader into making his or her own interpretations, drawing his or her own parallels with our own lives.

All the stories have Gaelic place names as their titles. Often the stories seem like explanations of the place names or – to put it slightly differently – the playing out of the forces named in the titles. This creates the sense of an elemental bond between story and landscape, so that the stories seem like expressions of fundamental aspects of Scotland. I feel this particularly in the last, “Beyond the Dubh-Chladach”. This too is a tale of yearning and deprivation but it’s the one in which the beauty of Scottish nature is most keenly felt and in which the boundaries between natural and supernatural are most ambiguous. According to the glossary, the ‘dubh-chladach’ or ‘black shore’ is ‘the stretch of beach between the sea and the high-water mark, and was regarded as an asylum from all kinds of supernatural beings’. The speaker of the poem is a woman childless after three miscarriages and two still births. When she becomes pregnant again her husband, believing magic robbed them of their previous children, tries a number of apotropaic spells. She does give birth to a beautiful boy, ‘blue-eyed, fair; fresh as meltwater’ and lovingly lays him

However, it turns out to be a false spring, turning again to deep-rooted cold, and the baby is wrong too;

Convinced he’s a changeling, the husband performs more rituals and the mother is forced to give him up:

Wonderful, that brief, vivid, unexplained glimpse of the grey-haired man. We’re left to guess that he’s the true form of the changeling baby, and to guess what kind of hunger has led him to take the human baby’s place. The baby never returns – the poem ends

The supernatural tale is beautifully fused with piercing evocations of a mother’s ordinary torment at not being able to satisfy an ailing child. The relation between the speaker and her husband is compellingly and subtly done too, tender love turning to conflict, bullying and anger. The love never explicitly disappears, but at the end the mother seems alone in her grieving over her lost child. What I said earlier about how much this poem makes us feel both the beauty of nature and the ambiguity of human relations to it comes across strongly in the last longish paragraph:

The ‘north-dancers’ are the aurora borealis. After the more elaborate richness of the lines preceding them, those last two seem to me a small wonder of expressive simplicity. As well as yearning for the lost beauty of the changeling son and for the faraway places he embodies, the phrase ‘our son’ also hints at a y earning for a recovery of the speaker’s old relationship with her husband, when they shared their grief at earlier losses.

Robertson moves easily between standard English, Scots and Gaelic, weaving them seamlessly together. However, for an English reader like myself, the Gaelic element remains irreducibly alien, forcing me to check meanings in the detailed glossary at the back. This reinforces the sense that the things we see clearly in the tales emerge in an abrupt, fragmentary way out of darkness. Ordinary English carries expressiveness of a more intimate kind and the alternation between the familiar and the strange, the clear and the cloudy is important. Robertson’s metrical skill shows most clearly in the weight and impact it gives to common words, as in the last two lines of my last quotation or in these prefatory lines which I can’t resist quoting for their ballad-like evocativeness: