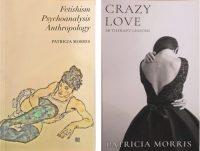 Definitions of words are slippery things.  They shift and change depending on who is using them and when.

Psychotherapist Patricia Morris undertakes a brave, elegantly-argued and learned analysis, enriched by her years of professional experience, to pin down the meaning of one very particular word – fetishism – and explore its distortion by anthropologists.

The two disciplines are related but distinct.  Psychotherapy looks at the troubled individual, while anthropology, as the study of a collection of individuals, might be forgiven for assuming that fetishism can be applied to the whole as well as the parts.

Freud, we’re told, was the first to advise this was risky behaviour.

He warned “that it is dangerous, not only with men, but also with concepts, to tear them from the sphere in which they have originated and been evolved”.

For the individual, fetishism is a lonely, unhealthy, obsessive, sexual state that demands the help of a psychotherapist.

There is some validity in applying the term to societies more broadly, even if the purists are disconcerted.  One of my favourite chapters is Marx, Anthropology and Fetishism, which examines the idea consumerism is a kind of mass fetishism and work is, for many, an equally unhealthy relationship.

Fascinating as all this is to the non-informed reader, the depth of Morris’s work makes its prime appeal academic.

For a lighter introduction and insight into her profession, look no further than Crazy Love – 50 short essays on the questions and issues psychotherapists tackle.

It would be the territory of magazines, such as Cosmopolitan and Psychologies, but is elevated by its disciplined telling of unwelcome truths.

The biggest danger here is that the reader emerges from devouring such compelling topics as “the adulterer who loves his wife” and “when good sex is bad news” feeling love is never sane – or, is the word mature?

Morris reveals the secret of a balanced, adult relationship with those we think we love and with society.

“Maturity means being able to distinguish between one’s inner wishes and one’s impulse to force others to fulfil them.  Maturity means coming to terms with the fact that one cannot control the thoughts or desires of other people.  Maturity means discovering what one wants, which is hard enough, and then, the catch, learning to acknowledge that in a healthy society one cannot have everything one wants.”

It’s enough to make any of us crazy from time to time.