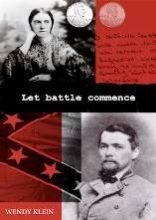 Poetry review – LET BATTLE COMMENCE: Norbert Hirschhorn reflects on Wendy Klein’s use of letters by one of her ancestors to make a poetic memoir of the American Civil War.

Wendy Klein’s great-grandfather, Robert Melvin Tarleton, Jr. (1838-1868) enlisted as a private in the Army of Confederate States of America, fighting to preserve the Secession, and slavery. His 175 letters to mother and fiancé, correspondence now archived at Yale University, provide another first-hand witness to the Civil War, the effects of which are still experienced to this day. From copies made by a cousin to share with family, Klein reports the part Tarleton played in the brutal story, using excerpts of the letters blended with her own verse. Her great-grandfather was an unapologetic slave-owning southerner ready to die for ‘The Cause.’

Tarleton was hot for battle with all its new and deadlier weaponry. In the opening poem, ‘Introducing Your Very Own Great War’, Klein lists ironclad ships, the Gatling gun, landmines, trench warfare, and the grooved, flesh-devastating Minie ball. “How clever you’ve become at maiming/ one another, at killing/what giant steps forward, your greatest war.”

Klein contemplates her ancestor in his photograph (‘I meet him’), as shown on the cover,

Let battle commence, Tarleton might have said, though the phrase is Klein’s. But the war, as all wars, was more squalid than heroic: mud, blood, corpses and moans of the abandoned in the field. It seems, however, he never saw battle. Four months after the war began, he was on hated garrison duty. In his own words, set to tercets by Klein,

750,000 men died by the time of ‘peace’, an astonishing two-thirds due to diseases: diarrhea and dysentery, malaria, measles, smallpox and typhoid ( http://www.pbs.org/mercy-street/uncover-history/behind-lens/disease/) . Battle ground surgery was marked by amputations without anaesthesia, wounds left to suppurate.

Tarleton was assigned to guard duty at Fort Morgan, located at the tip of Alabama facing the Gulf of New Mexico. When the Union Army captured the fort in 1864, he was sent to The Arsenal in New Orleans as a prisoner-of-war. He somehow managed to escape, fleeing to Alabama 360 miles away on foot through swamp and alligator infested bayous. By the time he reached safe haven and his fiancé, he was ill and emaciated, dying three years later. Unable to farm his land on his own, defeat was a bitterness:

Tarleton survived long enough to allow Wendy Klein to exist, for which she grateful. “And who, now or then, will have/ the audacity to judge him? Not I.” (‘R.I.P.’)

Let battle commence is as much Klein’s battle with her own ambivalent feelings. In the final poem of the book, ‘Epitaph 2020’ she recounts her southern cousin’s futile battle “to break some cotton off close to the root”, cutting herself in the effort, thus

Klein’s humility and generosity of spirit suffuse this fine account.