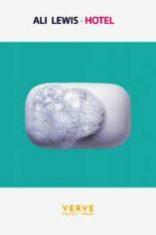 A title can often prove seductive to a linguist and Ali Lewis’ Hotel is no exception. As I was awaiting the arrival of this debut pamphlet, I mused about eclectic zoom rooms of poems; anticipating each checking-in with an air of flair, intrigue and panache. Published by Birmingham based Verve Poetry Press in their experimental pamphlet series, these nineteen poems over twenty-six pages of poetry sashay in to startle the eyebrows of any concierge. Satisfyingly, each one effortlessly fulfils its purpose like a seasoned traveller.

Omission of punctuation enhances exhilaration and within the first stanza of the first poem ‘Pressure’ I am riding alongside the poet, who is unequivocally in the driving seat, through dangerous territory and in uneasy dependence. Any sense of escapism has been lost and the reader is complicit, an accomplice no less. All that’s left, in true Hughes style, is a little goblin of the pheasant popping followed by pressure washing blood away:

Herein lies the strength of Lewis’ poetry, perfectly timed space for the reader to conjure up movement, gesture, facial expression and posture from a chosen lexis. Once within this pleasantly contemplative state, the reader’s expanding internal narrative is often sideswiped or abruptly clipped, as in ‘Putting the World Away’

and then spun around on a fun-loving new trajectory. This poem’s specific surreal imagery skips along magnificently, the world curling up: “the two of us bedded down / tessellated” and, once again, the reader is lost, this time in intimacy. An exquisitely, perfectly complementing poem, both in form and content, faces this, ‘Expanding Universe’

Lewis closely observes power relationships which are often overtly or subversively, but always fascinatingly, explored in this collection: “He promised me we’d never switch. / He’s afraid to die and I’m afraid to kill” (‘Making Love to the Knife Thrower’); “Simone, who was fine-tuning a ruinous argument” (‘S&M’); “or say for certain where she stopped and the miscreant began” (‘The Diamond Cutter’).

The poet continues to expand and contract experiences inherent in this work which include the fate of rhizomes and flowering plants in the hemp family, waterparks and self-sufficiency. ‘The Best Thing About Falling,’ is a short poem which in a masterly way creates falls to feel like an eternity. Lewis always tenses and relaxes each component of these poems pertinently so that the languid and the vital balance the tone with precision and with astute forethought. Some poems capture current political zeitgeist – for instance ‘The Past,’ ‘The Englishman’ a nd ‘Carpet,’ “and how, like a bad hotel / carpet, his pattern seemed to mask / all the dirt.”

Highly recommended, Hotel leaves me checking out with keenness and anticipation to read further poetry by Ali Lewis; for, surely, this firmly establishing pamphlet is a prequel for a future collection to be written.