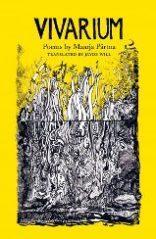 Poetry Review – VIVARIUM: the hidden violence of passing time, climate-change, history and the sense of self – Eret Talviste finds all this in Maarja Pärtna’s poetry

These are a few lines from one of the poems, ‘weathervane’, in Maarja Pärtna’s Vivarium (translated by Jayde Will). These lines capture the beauty and violence of a summer day in countryside. The poem hints at how an idyllic summer day embeds (hidden) human exploitation of nature; the weathervane in question is the corpse of a kingfisher used by humans to guess the directions of the wind – an old habit that was common in France and England. Although Pärtna lives in a tiny country in Northern Europe, Estonia, the poems are relevant for people residing far beyond Estonia or even Europe. Estonia, covered largely in forest, is, in a sense, like the Garden of Eden in a world that less and less resembles a garden. The Garden of Eden, however, is, or was, a place containing a problem for humanity. Pärtna’s poems capture today’s hidden threats – the urgency of climate concerns and other crises, for example immigration. This urgency is never explicit in the poems, but always burns between the lines, as ‘attic’ says: “[…] you feel the silence that surrounds your inexplicable feelings of expectation.” Jayde Will has captured the subtle social and political urgency within the poetic artistry of Pärtna’s original poems, and this makes the English edition as relevant as the Estonian original.

Vivarium was translated into English and published by the Emma Press in 2020 after its original publication in Estonian in 2019 by Elusamus. The English edition is shorter, and without illustrations or photographs. The original illustrations are in black and white, drawn by Lilli-Krõõt Repnau. They resemble sketches of parts of nature, perhaps a riverbank and a tree, perhaps an ice-berg. They also look like human internal organs such as the heart, or the rhythm of heartbeat in the machines in hospitals. In short, they are ambiguous and seem to illustrate the two topics embedded in the poems: the condition of the natural world we live in, and our own interior condition, maybe both physical and psychological. The image on the English translation’s cover resembles both seaweed and flames; it also reminds me of the film Annihilation (2018) with some unknown plants growing, the material world transformed by an alien component alongside the human self. Something about Pärtna’s poetry conveys similar questions to Alex Garland’s film (and perhaps to Jeff Vandermeer’s book that inspired the film): What effect does the material environment have on a human self? What effect does the human self have on the material environment? How to understand human selves in the midst of changing material environment, which is in fact largely changing because of humans and their inner desires themselves?

An important aspect of the physical book itself is the play of colours. Both English and Estonian editions have a bright yellow cover, in the middle of which is the aforementioned print of plants or flames. However, the Estonian edition’s first pages are pitch black. The yellow of the book for me is the heat of the sun, year by year more dangerous, yet still vital to Earth and everything on it. The yellow is also perhaps a stubborn human desire. Against the green of grass or the white of the table, the yellow burns bright. When I open the Estonian book, the yellow is contrasted with pitch black; and instead of bright white it absorbs, it is deep. I read parts of the book outside and turn to face the sun, do the forbidden thing and stare into it for some seconds, then close my eyes – I see blackness with bright yellow dots dancing, blackness with a memory of yellow. For me this contrast is so important to the book. Although the English visuals do not have this striking effect, the poems still embody it.

The black seems to signify and visualise the threat embedded in some of the poems. For example, ‘blackout/ arrival’ says:

The darkness here covers the many layers of issues experienced in time: the haunting sense of Soviet history, people fleeing Estonia in boats to the Western world, to freedom and light. But the darkness conveyed here also carries references to today’s immigration, especially to war refugees from the Middle East. The darkness also makes the narrator think of her own present comfort in the midst of light switches and screens. She tries to imagine what ‘real’ darkness might look and feel like:

Here the darkness of different times and events in history seems to melt into the absolute darkness of the world coming to an end, “a place no ringing/ of a phone can reach./ a place no lamp turns on.” Thinking of the yellow and black of the material book, this poem captures how the darkness is hidden behind or inside the (yellow) light of civilisation.

The collection seems to be about time too then – personal time, historical time, and cosmological or deep time, and the constant thought of time coming to an end. There is also a desire to capture time, to freeze moments. Hence perhaps the photographs in the Estonian edition. Besides actual photographs, the poems themselves are photographic. The poem ‘self-portrait’ speaks of “… this photo where I/ captured you and made you become/ unchangeable, defined –“. This “you” is the author herself. There is a violence involved in capturing moments and people like this, because she tells us how she immediately wants to get out, take action, write poems.

Although the English edition has fewer poems, both collections start with ‘house’ –

This opening poem works as an image of being in the middle of something (not just the field but something larger), and not at a beginning or an end. Here is a frozen moment in the middle of time, like in a photo; a frozen moment to which subsequent poems will bring feelings of impatience and uneasiness. It feels as if there is a sense of inactivity right from the first poem. It seems to represent humanity’s unwillingness to react to the often negative changes that we see unfolding through time to our environment. Accordingly, the poet seems to have a central doubt about herself and her capacity as writer to make a change. Or perhaps it is a more general doubt about any words being able to make a change in the world.

In ‘weathervane’, Pärtna writes about “titles, news, articles/ books, shows, conferences” that are written and held in certain places of the world. At the same time, “on the other side someone cries out -/ a voice that’s never been heard before”. The idea here is that privileged people organise conferences, publish books, share news (all necessary things in their own way) but the lack of lived experience of climate crisis somehow limits the power and sincerity of these wordy actions. On the other hand, in “third” worlds, people feel the effects of the climate change. Pärtna writes: “how hopeless it is to try and direct/ the path of words in this world.” In other words, we do not know whether and how all these important words can change and shape the world. And yet, words are writers’ medium, and she finishes ‘weathervane’ with a following thought: “this debate is older than me/ but it’s up to me to resolve it”

There is then, a high sense of responsibility despite scepticism of one’s own power to trigger change. In ‘self-portrait’ the poet refers to herself as “you” because she sees herself in a photograph and becomes other to herself. This otherness of one’s self and actions seems to be important for critical eye. The collection is largely about her, but outside the photo she “ha[s] no voice nor a name.” Is this “fall/ into selflessness” what we need to be able to see the bigger picture, the weight of our actions, our thoughts? And yet, looking at herself from a distance, she thinks “perhaps this person is me.” Vivarium should make the reader too feel inquisitive about their own self inhabiting the world. The poems put forward the idea that world, civilisation, organised society all add up, in a sense, to our collective self-portrait, with internal desires projected outside ourselves:

I read some of these translated poems in a “square” in Berlin in 30 degrees at the end of July. The heat in the city is something different from countryside heat. I was on a little patch of grass next to a playground where a sign said: “There is no planet B: CO2-neutral bis 2025. 5 years to save the world.” Pärtna’s poems won’t shock you, make you feel guilty or hopeless the way a #mayday2025 sign does. When she looks in the mirror in the poem ‘bathroom’ she states that “what is right or true/ barely interests you at all – / all you want is to/ give shape to thoughts.” These poems do not try to figure out what is right or wrong – they just want to express the particular feelings and thoughts of a particular person. There is no moralising effect – Pärtna is not an activist who will shame you for flying, eating meat, buying things in plastic containers or for any act of desiring. Instead she talks of the complexity and (subtle) violence of human desire and orienting this in and through words in a material world that becomes more and more fragile to human touch.