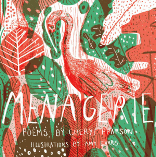 The book feels and looks gorgeous, with its soft pink and green colours, thick paper, colour printed words and playful illustrations. The pamphlet form is sometimes used to create beautiful, tactile objects like this, a lovely thing to own as well as read.

I have followed Pearson’s writing development for some time now, since she won the Cheshire Prize for Literature in 2016, and I heard her winning poem. Her detailed imagination and deft lexical choices support her freshness of eye. These animal poems are arranged into three sections, by the elements they inhabit: water, earth and air, with six creatures in each, giving a pleasing symmetry. Pearson’s selection of creatures is out of the ordinary too, which enhances her sense of wonder at nature’s richness.

‘Consider the Seahorse’ captures its magic. Often very visual, Pearson sees the tiny creature as a question mark, ‘but no one asks a thing’. She invites the reader to imagine a lit aquarium, where the breath is ‘tinselled strings of air’. The assonance and consonance here makes this phrase beautiful to hear. Throughout this twelve line poem, arranged in couplets, she compares the sea horse to a land horse, giving the pros and cons, the things he misses and gains. The paradox is that the sea horse lacks freedom, but has more in some ways, because:

This poem prepares the reader to look at the animals slant, in a new way, which is what poetry should do: make familiar things strange, so we see them afresh. ‘Octopus Tank, Torbay Aquarium’ takes astonishing risks to create its enchantment. Why indeed shouldn’t Pearson compare the octopus to murmurating starlings? It works because the link is made so clear: it’s the surging movement, as the octopus swells and writhes, so do the birds moving as one in a ‘ribbon’. Pearson goes a step further as she identifies the knot at the moving centre as ‘God’. This pantheism seems perfectly natural because the imagery is concrete:

Pearson also compares the octopus’ arm to a hall rug, ‘long, embroidered’, and later in the poem, ‘a stream’. Minor sentences offer punch: ‘Opening. Closing… For salt. For dark. For crab’. We are encouraged to relate to the octopus through the detail of the biologist saying she’s as intelligent as the average three year old, but Pearson also emphasises her strangeness, how far from home she is, how alone.

These poems are made to delight the senses. They are redolent with texture and aroma. In ‘Lobsters’, the harbour has a ‘tin stink’(again the music of the phrase makes it memorable). In ‘A Comb Jellyfish Swallows Another Comb Jellyfish’, the simile ‘Like the lick of flame in an air-balloon’s silk’ is at once visual and tactile. In ‘Great White’ she admits the sharks could swallow us ‘like communion wafers’, another tactile image.

The earth animals are just as seductive, from ‘Hedgehog’ written in hedgehog-speak. Impossible to quote an extract, since it is so completely itself across its exquisite eight lines. There are poems here about a publicly-dissected giraffe, a herd of deer struck by lightning, a sick lion injected with gold to treat arthritis. Pearson does not only articulate beauty in nature; she also tackles the relationship between animals and humans, and between animals and the environment. The vixen loves her cubs and sees them as small flames of hunger and mother. The colours in this poem are red, white and black:

Through those colours and the rhythm and neologisms in the language, the urgent need for survival is powerfully portrayed.

The third section focuses on birds. It features a displaying peacock at Castle Howard, showing off on a wall. Pearson distils the plumage with this astonishing metaphor: ‘This is where/ the summer went: blue sky, green grass, gold/ flower to butter a throat’. That line break after ‘where’ puts exactly the right emphasis on the opening phrase of the next line. ‘Magpie’ shows the bird strutting city streets, ‘dapper as Capone in his suit and spats’. The anthropomorphism is comic: ‘Imagine a gun slung underwing’; but when a toddler runs after them, they revert to birds, and ‘lift off in a sheet of black’, shattering the illusion of humanness, and become again a force of nature. The characterisation of the magpie is fun and apt. In ‘Flamingo’ the birds are presented using metaphors of taste – ‘Their glad wings / sweeten the water’, ‘Light as meringues’ – as well as the sense of touch:’ white lace held against a girl’s cheek’. The ‘Kingfisher’ poem has uneven lines, to follow the swiftness of a diving kingfisher, and the bird is ‘an impossible comet’. ‘Fledgling’ returns to the couplet form that characterises many of these poems, with generous long lines. This poem is a tender meditation on the fallen, broken bird, still with its shell nearby, but it makes Pearson remember being a young teen, through seeing its wings as being like buds, just as newly-growing breasts are. This link leads Pearson to a discovery at the end (as the best poems offer) and also a juxtaposed question:

When a poem ends on this knife edge of thought, it provokes the reader to continue the question, relate to it, think of how it fits their own lives. It continues to reverberate.

Fittingly, the last poem is on that most strange bird, the owl. The title ‘Owl Poem’ is simple and childlike, making the reader think of the wonder children feel for owls, with their human-like faces and large eyes. Pearson seduces the reader with a moody description of night-time, using the colours blue, navy and gold, before she pounces with her question: ‘What settles a grief?’ There is no real answer, just ‘the owl knows’. The last two lines offer a valediction:

This pamphlet is an astonishing achievement. Each poem creates a moment of stillness, and the language throughout delights. Pearson has a wonderful imagination, which allows her to recreate her encounters with animals so the reader can relive them. Her imagery is often striking and unusual. I particularly admire the way she defies some of the ways critics seek to control poetry; she breaks rules like don’t use abstract nouns, for instance. She gets away with it because it’s so deft and the reader is always prepared by concrete comparisons. I feel enlarged by having read these poems so closely.