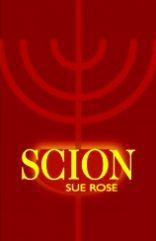 Scion is a book about roots, which is perhaps ironic given that one meaning of scion is a graft shoot of a plant. And yet, it’s also not so ironic because the book falls quite neatly into two interwoven (like roots) sections where we explore Rose’s family lineage and then ,towards the back end of the collection, we deal with her grief at the loss of both parents – first her father and then her mother.

However, beyond that quite simplistic reduction, there is much more to be found: there’s religion, guilt, acceptance, glorious colours and descriptions – and an opportunity to learn more Yiddish than I ever expected to learn. As Jacqueline Saphra says on the back of the book this ‘finely-wrought collection explores the language and limits of Jewish identity, culture and family ties’

What I found fascinating while reading the collection was Rose’s use of what’s going on beyond surface level. Like the aforementioned roots, or like a glacier, so much of what happens in the collection is the stuff we don’t generally see. And this is evident from the moment we turn to the first poem. In “Scion” we’re asked

Just to jump to another poem for a moment (and there is a reason), I note that “Jew-ish” opens with the lines ‘I fall between two schools / of fault. I’m blamed / for not being Jewish enough’. In a book that is shot-through with guilt at not being Jewish enough there’s a powerful hit in the first three lines of “Scion”, where the word ‘snub’ acts as a powerful line break. The word draws attention to itself and has me wondering if it is a reference to its use as an adjective – a short and turned up nose – and also as a verb – to rebuff, ignore or spurn. On the back of the book Claire Crowther declares that these poems are ‘technically exquisite’; and based on the resonance of the word snub I am happy to believe her. It’s a bold move to put the title poem at the start of your collection, but Rose pulls it off with aplomb and thus the tone is set early on.

The theme of looking below surface level to what we don’t see is to be found throughout. Rose gets beneath the skin quite often, for example in “Vascular” where ‘…the back / of every hand branches / in a tangle of lines / hard to tell apart, veins / like creeping gnarls’. Later on in the poem she mentions things that are ‘yet below / the meat of existence, / in this arcane system’. We really are in amongst the blood (and further in than that) in this collection. It’s worth quoting “Phlebotomy” in full, not least for the beautiful rhymes and half-rhymes of each stanza, but mainly because it’s glorious…

While the first section of the collection deals largely with Jewishness, lineage and self-examination, the latter half talks very movingly about the deaths of two parents. It all starts quite subtly in “Akin”, where we find ourselves observing a beautiful scene somewhere in Italy.

A kingfisher interrupts or invades the scene and the reverie changes

That moment of grief gate-crashing a beautiful scene makes for a very powerful poem, and I found myself chanting the line ‘with horns, dust, diesel, turns’ as if I was summoning something. The internal rhymes and rhythm of that line alone are worth the price of admission.

I’ve touched on this already, but Rose’s use of sound in her work is wonderful. The poem about her father, “This Fallen Tree” (and trees are another motif in this book) has several examples of sound being used wonderfully, and this is before we get to the poem itself and what it’s saying,. But who among us wouldn’t want to find themselves saying ‘chest thrust’ or ‘legs inflected’ or ‘ hands stands’.

The poem talks about a fallen tree being ‘helpless in its recumbance’ like her father at the end of his life, but the real punch is in the last few two-line stanzas.

If we’re still collecting reasons for the entry fee, then ‘the transparent tower of air’ is another solid one, and we can safely add ‘like a fakir’ to the list of nice things to say out loud. But the last line is the one that gave me pause. Is the deadwood that’s being looked down on the father’s body, or is it more guilt being piled on to Rose herself? I’m erring towards the former, but can’t shake a feeling about the latter.

The poems in which we see the decline of the mother are a powerful exploration of the impact of Alzheimer’s on a person and their family. “Going Dark” tells us that ‘In her mind/ neurons are winking out…./ particles // of past whirling away in a blur’. Meanwhile the family ‘bearing high our lanterns / of gentled light to help her find her way, / doing our level best to give the lie.’

“Windthrow” talks about the end being near and accepts that ‘soon she’ll go down and stay, / unable to stand the vertical.’ However, there’s a lovely call back to “This Fallen Tree” where this woman echoes her husband at the end of his life.

It’s very clear that this is not Sue Rose’s first collection. We are in the hands of someone comfortable with their craft and able to work the raw material at their fingertips. The exploration of history, place and person in this book feels to me like something that had to be written to help Rose understand her place in the world. The final words of the book are

Two things strike me here. The first is that the ‘dusk’ offers symmetry to the ‘dusk in my skin’ mentioned in the opening poem—high marks out of ten for that. However, that ‘a route back’ is doing a lot of heavy lifting here, at least in my reading of it. This whole book is route back, both in time and to a sense of self.