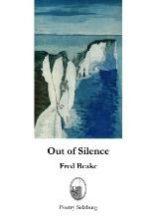 Fred Beake is a poet and translator, who has been publishing poetry since the late 60’s. He was the first Chairman of the Avon Poetry Festival, co-edited The Poet’s Voice (now Poetry Salzburg) and ran the Mammon Press. Given his long career, it is perhaps not surprising that the predominant mood of his latest book, Out of Silence, is autumnal, an attitude summed up in the poem, “Autumn and Age”:

Intimations of mortality abound. The opening poem, “Walking to the Station”, describes a pre-dawn walk to a railway station in terms of the journey to the underworld (‘The station arrived at, almost too quickly, / is cold as the entrance hall to Hell’), although in this case it appears to have been a false alarm. At the end:

Later in the book, the final journey is presented both more bleakly and more obliquely in “Setting Out”:

There is a mystical element to some of Beake’s poetry, which in general focuses strongly on the natural world. “Among Mountains” presents a paysage moralisé in which, as he approaches the summit of his life’s journey (‘We are drawn into the mountains / and the streams sing / of ultimate despair’), he is able to look down on ‘dark / ocean waters / before my eyes and grey islets / which are / so far away and luminous / in this quiet winter light.’ It prompts him to think that ‘Something is beyond individuality, / something steers’, but this isn’t conventional religious mysticism. The poem ends more on a note of pagan stoicism: ‘let there be / a scent, a memory / of steadfastness in dark days.’

What Beake does believe in is poetic inspiration (‘True beauty seeks you out / like a cat deciding whether or not / to jump on your lap’, as he memorably puts it in “Strange Happening”) and it is — as I read it — the subject of the title poem, “Out of Silence”, which carries an echo of Keats’s ‘viewless wings of Poesy’.

Beake takes a dim view of the way that poetry is taught. In “Why Do We Bother?”, the guardians of contemporary poetry ignore the rules, while introducing proscriptions (and prescriptions) of their own. The way to get ahead isn’t to analyse the techniques of past masters:

In “Madness, Daffodils, Wars and Roses”, the words that come out of silence do so quite literally in the form of voices heard in a half-awake state:

Although more surreal than most of his poems, this is typical of his concern with the blurring of boundaries, whether it’s the land and sea (Beake lives in Torquay), or the sea and sky: ‘the horizon’s a mystery / in which ocean and sky are much the same’ (“Time and Mr Brunel”). There are also time shifts and an emphasis on the changing seasons, which perhaps explains why trees, as seasonal markers, make frequent appearances. “Strange Autumn” finds the poet professedly confused about which season it is:

To Beake, spring is as important as autumn, the common factor being change. “April and October” ends:

The theme of change and renewal finds its clearest expression in “The Wind Waters”, a poem about the hydrological cycle, which begins:

The point here is that there is both renewal and change — remaking involves reworking.

Although frequently symbolic, Beake’s world is recognisably real. He has his feet firmly on the ground even when he is looking at the sky (“Walking Home” ends: ‘Finally left into pot-holed Hillcrest / glancing at the tumultuous rooks’). He doesn’t ignore society, although he may at times feel alienated from it:

The alienation prompts poems that look at human beings from the viewpoint of birds (“Swansong”) or bees (“Bees Might”), as well as of an observer who might equally be a bird (references to ‘plumage’ and ‘wings’) or the poet himself (“Coffee Shop at 11 AM”). More conventionally, it places him as a detached observer, as in “The Oxford Train”, in which an American child is worried that the train-driver might get a speeding ticket, or “South Bank Café 5 PM” about people at other tables, which ends: ‘this evening was lit up / by the light of a young woman / I have never spoken to and never will’ (perhaps not such a detached observer after all).

It is a recognisably contemporary society, in which ‘man-positioned flagstones are un-cemented / and go un-repaired by a penniless council’ (“What Is to Be?”) or ‘now they buy up this ancient beauty // and over-prettify the country houses / and steal diesel from the farms’ (“Dorset Presences”). Climate change is addressed in “Prometheus”, where ‘the fire you smuggled / out of Heaven / for our renewal may soon / turn the planet / to cold ash’, or more light-heartedly in “Global Warming and the English Character”.

Even Beake’s historical poems, dealing with periods such as Dark Age Britain or the English Civil War, have a relevance to our own troubled times and the poet’s own personal history appears in poems about childhood in the West Riding and student days in Brighton, as well as those written in memory of his father and brother.

The poems are presented in a common format, with every other line indented, perhaps to suggest that these are modern elegiacs. Although they cover a wide range, there is a consistency of tone, with Beake favouring a conversational style that is admirably clear, but also capable of evoking atmosphere. Although I am not qualified to judge them as translations, the “Versions” that end the book (which include Horace, Alcuin, Ronsard, du Bellay and Tu Fu) are a pleasure to read as English poems in their own right — and ones that chime with the concerns of Beake’s own poetry. Fred Beake may have reached the autumn of his life, but it is proving a fruitful season.