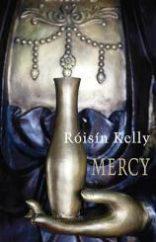 Róisín Kelly has chosen to preface Mercy, her debut collection, with an epitaph from the Greek surrealist poet, Nikos Gatsos: ‘I see shooting stars rocking your dreams / but I hold in my fingers / the music for a better day’. With their visionary outlook and optimistic self- confidence, these lines lead the reader by a natural process into ‘Mercy’, the collection’s opening poem. In this poem, set on a beach facing the Aegean, there is a dichotomy between a pagan delight in the senses and religious puritanism, as exemplified by the Greek Orthodox Church and, presumably, Kelly’s Catholic upbringing:

Kelly’s striving beyond her Irish roots towards an idealised South, where life is freer and less inhibited, has an affinity with the work of the Irish-language poet Nuala Ní Dhomhnaill and this poem, in particular, expresses a hedonism that is not dissimilar to that of Ní Dhomhnaill’s ‘We Are Damned My Sisters’ whose opening lines are given here in a translation by Michael Hartnett:

However, Kelly has a quieter, more introspective tone that is entirely her own: ‘Guide the small boat of my body back to myself. / Tell me which path brings me home’. The tension existing between sin and temptation is confronted even more directly in the opening lines of ‘Eden’: Forgive me, Lord, for I have sinned. / In your garden of clear waters and mossy walls / I reached for the high fruit’.

Other poems in Mercy are informed by a desire to be at one with nature and to achieve a sense of wholeness. Although Kelly’s poem, ‘Leave’, is about the end of a relationship, it implies also that loss and decay are an essential part of the natural order and will, eventually, lead to renewal:

I have suggested an affinity between Kelly and Nuala Ní Dhomhnaill. She may also have learned something from Eiléan Ní Chuilleanáin, that other doyenne of contemporary Irish poetry. Like Ní Chuilleanáin, she has an ability to draw the reader into a poem without necessarily spelling out its context. In both, there is frequently a dreamlike clarity in the details, even when one is not entirely clear where the poem is heading. To some extent, the reader is like the woman in Mar-a-Lago:

Moreover, the ‘bayou’ of this poem is a swamp beneath the surface of which ‘lost centuries’ are preserved ‘like a jam of clotted green memories.’ In ‘The Cave of Melassini,’ the protagorist abandons the clarity of an upper world with its Orthodox shrines for a mysterious ‘underground lake / where the nymph drowned herself.’ In poems such as ‘Storm Warnings’ or ‘Tigers in Leitrim’ one may not be entirely certain whether there is or isn’t some deeper meaning at play. One simply enjoys the surface detail and is happy to accept it on its own terms. This is, in fact, one of Kelly’s strengths: her imagery is never overblown or forced. It is always memorable and focused. In ‘Mars in Retrograde,’ she is gazing up into the night sky, while her ‘swinging bench moans like a ship.’ On recognising one of the constellations, she says: ‘let me float to Orion, / let my fingers find his belt’s cold buckle.’

However, it would not do to leave the reader with the impression that Kelly is an excessively introspective poet. ‘Dominio Vale do Mondego,’ a poem in which she describes an olive harvest in Portugal, is exemplary in the way it brings a scene to life through its accretion of carefully chosen details:

In ‘Oranges,’ she playfully compares the process of choosing a lover with that of choosing a piece of fruit. In ‘Rose’ she cunningly subverts Yeats’s high-blown romantic symbolism in a poem that is both accessible and entertaining. Moreover, as a counterweight to the hermetic side of her inspiration, there are poems which have a clear connection to the outer world and, sometimes, a more overtly political stance. In poems such as ‘Ophelia’ and ‘Amongst Women’ there is a strong sense of female solidarity. In ‘Paris, 13th November 2015,’ one might almost miss the sounds of gunshots ‘banging like fireworks,’ as the poet takes us back to her memory of a ‘gig where we had our first kiss’. However, in ‘Tuam’ she draws a gruesome parallel between the ‘Killing Fields’ of Cambodia and the discovery of a mass grave at the former Bon Secours Mother and Baby Home in Co. Galway. Equally powerful is ‘Miracle at Standing Rock’ in which she compares the greed and exploitation which lay behind the Irish potato famine with a callous disregard for the rights and traditions of Native Americans:

By any standard, Róisín Kelly’s Mercy is an impressive debut. It’s a collection that one needs to savour slowly and to which one can return with increasing pleasure. The language has cadence and focus. The images are burnished. She is, by turns, visionary, savvy and passionate. It will be fascinating, in the years ahead, to see where her poetry takes her.
.