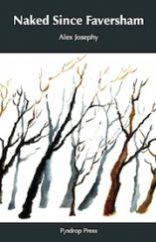 Alex Josephy’s experiences of two countries, Italy and the UK, and three languages (English, Italian and Welsh) interact and enrich this collection. Multiple voices interweave in a variegated landscape. The poems reveal close observation of apparently ordinary objects and everyday events that become the subject of metaphorical explorations that propose fresh interpretations. Different themes are developed, from memories of places, relationships and displacements. This is a multifaceted collection that invites the reader to follow its meandering paths that have unexpected bends and open endings.

The poems are in English but Italian and Welsh words help to define Josephy’s background and life choices. She lives in London and Montalcino in Italy, whose surroundings she vividly describes. She also revisits her Welsh heritage, and in doing so is conscious of a past that cannot be overlooked and that is an essential part of her being.

The sky, cielo, in ‘A Word in your Ear’, resonates with its infinity and is sensually connected to the intimacy of an encounter and the sensuality of food:

The musicality of Italian words decorates a good number of the poems; when they merge with the English lines they create unexpected sounds and original perspectives, as in the poem about the cross-breed wolves kept by Maria:

The knowledge of different languages and the experience of living in different countries combine to expose a sense of displacement that is nevertheless a choice for the poet and is resolved or transformed in wider and enriching cultural views. Self-reflectivity therefore opens up to multiple stories, some sad but still vibrant with an enthusiasm for life:

Curiosity about the world around her and empathy with all creatures are shown in detailed observations that explore unusual sides of the subjects that Josephy describes and are expressed in striking imageries:

The poem has the form of a double coil, reflecting the shape of the two serpents making love. This is a skilful and effective way to convey the two reptiles and metaphorically alludes to the twisting and turning of the complex act of making love, which is both physical and psychological.

The poem ‘Naked Since Faversham’ is particularly successful as the quick flowing of the enjambments reflects the decision of the protagonist to get rid of her possessions and probably of her past, throwing everything out of the window:

A similar effective result can be seen in ‘Fava Leaves’, a poem that skilfully adopts the triolet form to express the grief of one of her Italian friends for the death of her husband. The repetition of lines echoes the recurrence of mourning in a sadness that also reveals a readiness to carry on:

The clever use of form and imagery convey the grieving but also the hope inherent in the plant that keeps growing. Therefore, loss and renewal mingle in the slow rhythm of the repeated lines that denote sorrow as well as a willingness to persevere.

Exploration of other countries and their languages not only involves curiosity but also implies risk. Nostalgia lingers in secret corners, as does the pull of death that opens up to the void:

Death is implicit but it does not seem to be the end; instead it is just another area to investigate and understand. A sense of longing for an almost impossible total freedom is present too in the allusion to the myth of Icarus and to the story of Thelma and Louise. The poet is attracted by the void, by its alluring danger and its inevitable ending, a conclusion that is envisaged but eventually avoided. Loss and regeneration therefore overlap in the poet’s choice to say no and to work in her own way.

Transformation seems instead to be an alternative path where humans and trees metamorphise into each other. The sequence of poems ‘Tree City’ refers to a passage in the Gospel of Mark where a blind man sees ‘men as trees, walking’. The healing nature of the miracle is therefore connected to the healing transformation that occurs in nature:

This captivating collection guides the reader along unexpected routes in a journey through different cultures and languages; it celebrates the choice to experience life in an unusual and yet enriching way. Josephy expresses her multifaceted view in fresh imageries, musical language and well-mastered forms. Her vision is thought-provoking in a gentle, subtle way and involves the reader in its mesmerising chant.
.
Carla Scarano