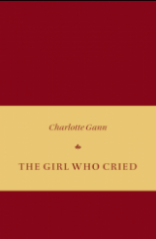 Poetry Review – THE GIRL WHO CRIED: Alex Josephy is moved by the eloquence of Charlotte Gann’s poetry

I can’t begin on the poems without first noting that Charlotte Gann’s collection is beautifully produced. The cover is a classy combination of ‘reddish umber, with…mustard yellow’ (as described inside in a helpful note for the visually impaired). All the small details of layout, typography and sequencing have been thoughtfully chosen, with attention to the balance between text, image and white space (actually pale cream space). Gann’s biography reveals that she once worked as a proofreader for a typesetters; I wonder if this might have informed the way in which she and Happenstance Press have designed this book. Many of the poems are also augmented by the poet’s delicate, quirky illustrations. These factors make the book a particular pleasure to hold and to read. Perhaps it’s not too fanciful to say that they provide a safe way of ‘holding’ Gann’s painful exploration of grief and distress.

The collection focuses tightly on one girl’s (or woman’s) unhappy story: a life lived in states of dread and unfulfilled need. These are poems that refuse the advice related early in the sequence, to:

Avoiding sentimentality and refusing shame, Charlotte Gann opens the box. Somewhere after the middle of the collection, there is a concrete poem specifically about attachment. The letter ‘a’ has been replaced most of the time with a symbol, ^, and the poem narrows or rather, to use its own term, ‘drills down’ to a point. The point is that no h^t is h^rd enough to protect us. Attachments are unreliable, and so the world is unsafe.

In another poem, the experience of queuing – particularly resonant in these days of social distancing – carries distancing to the point of nightmare. The poet or narrator is standing in line at a book signing, but it becomes apparent that she wiill never reach the front of the queue, while tellingly, the inaccessible author dwindles to the size of a ‘worry doll.’

Gann pursues these themes through apt and often surreal or unexpected images. There are many desirable, potentially safe spaces from which the ‘girl’ is excluded: a door, a house with no door, a picture frame, a box. In lines that ache with longing, a hug, acutely observed (‘in the film’) and longed for, is not actually experienced:

The pain of rejection surfaces over and over again, in different guises. The ‘girl who cried’ seeks love and attention, reliving a teacher’s ‘absent kiss’, haunting ‘a boyfriend’s mum’s magic kitchen’. There’s a constant shadow of danger and precariousness – but not an absence of hope. A spider’s web

An adolescent foray into smoking is part of the quest; even the girl’s lungs, ‘sacks of folded blackness’, seem to express her sense of being lost. Smoking is a kind of self medication:

Anxiety follows the girl into adult life. She has an unerring ability to detect loneliness, and to depict it with a counter-effect of lyricism, for instance in

Other characters haunt the poems – the teacher, an ex lover (who might still be appealed to), a brother, equally traumatised, equally consumed by rage and fear, whose ‘skin itches’. You could say that the collection centres around ‘being uncomfortable in one’s own skin’. There are women in fear of or exploited by men. There’s a woman ‘craning at a window’, an ambulance ‘hurtling’ toward a death. The exact circumstances that have caused the implied damage are never made explicit, but that makes the poems all the more powerful; we learn enough to intuit a storyline.

Sadness is never more than a beat away, but the poems are in no way self-pitying and there are moments of intense beauty. One poem describes a hill climb in deft strokes of colour:

Within a few spare stanzas, the mood darkens; the speaker compares herself to a hawthorn tree:

To me, that image of the wind-blown hawthorn works hard for the poem, in a typically unobtrusive way, hinting at the resilience of a hillside thorn tree, as well as its vulnerability.

There are also, mercifully, moments of glad illumination. In a marvelous poem about a phone call, even though the conversation involves an unresolved argument, the poet is consoled by sensing ‘the intricacies/ of another human being.’ I don’t know how optimistic Gann intends this image to be, but to me it implies an ability to empathise, however tentatively, through careful attention; her very otherness makes her unusually perceptive. And the final poem in which she confesses to ‘love’, while refusing any easy comfort, suggests a small, but hugely courageous flame of hope kept alive.

These lines sent me back to a sea poem near the start of the book (and quoted on the back cover), in which the poet takes us down into the dark, where, never far from the Void,

For me, one of the pleasures of this fine collection is its consistency, the way in which images recur and deepen, making it worth reading in order; it’s not a book for randomly dipping in and out. And this adds up to poetry that is confidently crafted, at the same time as being so very raw and exposed.

I found Gann’s poems breathtaking. There isn’t a single unnecessary word; every page is eloquent, shedding light into very dark corners. With clarity and restraint, she finds ways to wring surprises and new insights out of everyday suffering, so that to read these poems, far from inducing more misery, is liberating.
.