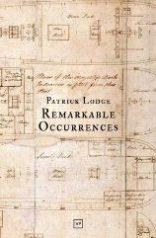 What a delight to discover Patrick Lodge’s work in Remarkable Occurrences, his third collection. His use of vivid and accessible language to invoke place and mood is skilled and subtle. The book is in two discrete sections: the first demonstrates Lodge’s versatility. Different poetic forms are used to cover wide-ranging themes from the personal to the political. We travel with him to China, Greece, Kosovo, and Italy as well as many UK locations. The frequent appearance of islands and seascapes suggest these are crucial to this poet’s well-being and creativity.

The second part of the book is a ‘sequence of personal reactions in several voices, to various aspects of Captain James Cook’s first voyage in HMB Endeavour’. Each ‘Song’ relates to actual events documented in Cook’s journal, the ‘remarkable occurrences’. Many conflicting emotions are explored in the nineteen poems: suffering, excitement, wonder and exploitation. There is loss of life on both sides and constant reminders of the acquisitive nature of Cook’s expedition. We are left in no doubt as to the damage inflicted on indigenous populations and culture in New Zealand and Australia at the time and subsequently.

Lodge’s skill at evoking place and atmosphere is clear in wonderland, set in central Leeds. Christmas songs play a loop ‘remorseless in their frenzy of cheer’ while homeless people stand in doorways waiting ‘for something to happen as if roughing it / on a bleak hillside somewhere’. The unbroken text emphasises the relentless nature of this dismal scene in which everyone and everything are struggling – the streetlights, the hungry man begging and the two disillusioned teenage girls: ‘It’s all crap and the food bank had no chipolatas’.

The ‘tourist-tat’ pottery of promiscuous coupling leads to the narrator dreaming of past lust and love. This stanza is rich with sensual imagery full of colour, smell and sounds. The use of italics emphasises the change of mood:

Back in Wales, the narrator’s familiarity with the landscape makes him stride out confidently despite the dangers of the coastal path in poor weather. He is ‘Pilgrim fierce/ in squall or spate,’ and looks forward to returning to his white barn ‘tethered / between land and sky’ that can coddle him with a fire and steaming bath. There ‘… I must write the seal’s bark, / the salt spray savour, the kelp reek.’ Assonance, half-rhymes and alliteration add to the musicality and celebratory tone of this poem “Ar Llwybr Arrfodir Cymru”.

Lodge is a close observer of people and their behaviour and the way we can make instantaneous judgments of others, often erroneously and to our detriment. In “The Greatest of These”, the narrator watches a young couple take ‘a gurning / selfie against the soaring cathedral.’ He condemns the clichéd action that seems to belittle the magnificent minster in York until he sees the man prevent his partner toppling over by placing a hand on her back. This ‘act of almost sexual choreography’ is humbling and the tone of the poem alters to one of appreciation and a hint of envy. It is deftly done in simple, direct language.

In the second part of the book, notes at the back provide the historical context for each ‘Song’ and its speaker. “Song of the Endeavour” is narrated by the ship herself, a converted coal bark:

An ominous tone is struck in the final lines, reminding us of the imperial nature of Cook’s expedition, when the Endeavour promises she will be:

Death is a common theme in this sequence of ‘Songs’, emphasising the cost to both Cook’s crew and to the Maori and Aborigine peoples. A young sailor, William Greenslade, alleged to have stolen a piece of seal skin, commits suicide. The Polynesian high priest Tupaia, an essential intermediary between Cook and the Maori, dies of fever on board ship before he can return to his island home Raiatea. The ‘discovery’ of New Zealand and Australia is marred by the loss of life and a loss of innocence, as described in the poem “Song of Young Nick”, a sailor who was only eleven years old when he joined Cook’s voyage. He remarks that:

“Song of the first contact” describes the disastrous events that occurred when Cook first landed in New Zealand at Poverty Bay and several Maori were shot. Lodge succinctly captures the lack of communication, of understanding and the brutality of the armed sailors. This sad, elegiac poem is followed by “Song of Sydney Parkinson”, a feast of words in ten stanzas of five lines each, detailing the work of this botanical draughtsman. Wonder and marvel are mixed with a desire to record the fauna and flora accurately for the benefit of science and learning.

The following words in Sydney’s voice could equally apply to Lodge’s poetry:

Remarkable Occurrences is a wonderful collection from this erudite but accessible poet. I am looking forward to reading his two previous books and hearing more from him in the future.
.
Emma Storr