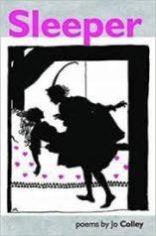 Sleeper is an extraordinarily timely collection. While many of us have struggled to find any positive aspect to COVID-19 and the lockdown period – especially where people’s health and livelihoods are threatened, and conversely, where keeping the country running has for some meant enduring a period of brutal, unrelenting work – Jo Colley offers (to echo Larkin) an enormous yes. It is not unalloyed positivity; the book is shot through with themes of darkness, despair, betrayal and worse, but overall Sleeper affirms what it means to be human in the most trying of times.

The collection is split into five sections, and moves through them on two arcs: from the clearest, most literal sense of sleepers (agents planted deep and working their way over decades into the target culture in order to achieve trust and access to secrets) – this includes telling poems on the Cambridge ‘Apostles’, and ‘The Wives of Kim Philby’ – through related, but more glancing senses (‘Cold War’) and finally to abstract notions of sleep, comfort and belonging itself, by way of women’s ambiguous role in all of these.

In parallel, as we move from Le Carré to motherhood (if not quite apple pie), the language moves from that of the taut thriller and the bureaucratic case report, often in terse prose poems, to more expansive ‘poetic’ verse. For instance, the opening poem, ‘The Ruling Class’, is short, brutally well-chosen and telling, a list with uncanny relevance to current leaders:

It is easy to see how such people are prepared “for a life defended against compassion” (‘Barbarians’), and Colley’s controlled rage is evident on almost every page, as here in ‘Top Drawer’:

The early poems rip and fizz with restrained passion. As the volume progresses, the title poem of the third section moves to a different tone – harsher, yet less explicit, almost plangent in tracking the long, grey social decline of the sleeper:

Similarly, as the startling, staccato prose poems fade out, longer, more meditative pieces begin to appear, and we move along another part of the arc. Colley retains her clear-eyed assessment of the world (indeed, the middle section could stand in for the overall theme of the book):

How beautiful this is; how relevant, how measured (and still bleak). Yet in the same piece, the poet rises from this knowledge to a greater feeling, glorious and specific, gathered from simple observation and counteracting the grim diagnosis of the title:

Nor does the poet restrict herself to her self – as the arcs of the collection move, upwards and outwards, she explores the layers of life and society that settle over people, and particularly women: sometimes they are cosy, almost welcoming, a blanket of retreat from the world into the comfort of memory:

At other times, they become both sinister and absurdly funny:

But it is in the seemingly-lighthearted sequence of vignettes about her mother, neatly distilling in verse the sort of controlled bursts of emotion she packed into prose poems at the beginning, that Colley underlines how we must find the positive in a world that will overwhelm us if we let it; subvert what we are given to make over the grey, and the misery, into light for the future. ‘My Mother as … a Music-Hall Favourite’ gives way to ‘Captain of a Grimsby Trawler’, ‘Member of the Royal Horticultural Society’ and ‘Best-Selling Lady Author’, but it is in ‘My Mother as Cat Woman, the Undetected Jewel Thief’ that we feel all of the currents of the book swell into its great conclusion, which needs no explanation, and is reproduced here in full: