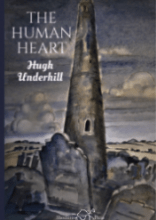 I suspect Hugh Underhill likes a challenge. He opens this collection with its title poem, “The Human Heart”, which is often a bold move for a poetry collection; but he also sets his stall out early with a quote from Mark Rutherford’s “The Revolution in Tanner’s Lane”, ‘The Human heart…is beyond analysis’.

The Human Heart is, to my mind, a collection of explorations of what the human heart (if taken as a conceit for emotion/what makes us human rather than just an aortic/ventricular machine) can make, feel or achieve versus what it can take or ignore. It is thus an attempt to perform that very analysis Rutherford says can’t be done.

The use of the title poem as the opening gambit works well as it introduces us to the collection’s modus operandi early on. In the third stanza we are told

Underhill then goes on to recount examples of German POWs ‘welded so fast together on a filthy/ floor…’ ‘Or at a photographic exhibition a baby in Biafra, […] crumpled like a wicked thought. It waits for medicine, / food. Neither arrives.’

This level of suffering is balanced out by words from the naturalist Richard Jefferies, ‘the green/ wheat of the human heart is not to be trampled out.’

That’s a lot of time to spend on the first poem, but it’s important because what follows largely cleaves to this blueprint—that of exploring the inner and outer reaches of the human condition through history.

The Richard Jeffries mentioned in first poem is echoed again in the second, “Do You Hear Their Echo?” where Underhill looks at the changing life of a blacksmith in a Sussex town (echoes of the hammering perhaps?). The poem mentions a ‘Sussex Crook’, and in Jefferies’ Nature Near London , in the chapter, “The Southdown Shepherd” we’re told that

That final phrase, “the hand shown in the iron” is a key one for me. It helps unlock The Human Heart. When I was first reading through this collection, it was only in the final poem that it all clicked for me and I finally saw into the heart of Hugh Underhill. However, by the time I’d read through what I felt to be ostensibly a history lesson—a valuable and interesting history lesson none the less, but quite a cold one—I had to go back over it and work backwards from the final poem, “An Alternative Person”, where Underhill talks about how

However, we must pause before we move on that to discuss the powerful early run of poems that deal with man’s continued cruelty, the acts the heart can create and continues to bear.

The section that begins with “Suppression Of The Family In The USSR” and ends with “Unredeemable” contains some of the most powerful poems in the collection. All focus on the terror and horrors of their respective tragic events: Stalin’s concentration camps, the Windrush scandal, the Syrian refugee crisis and the continued bombardment of an unspecified Middle Eastern country.

The first poem is based, it would appear, on the book “The Whisperers: Private Life In Stalin’s Russia” by Orlando Figes and discusses the horrors wrought on the internees of Stalin’s camps. However it also considers the long term impact it could have on the children of survivors. Each poem in this sequence of four starts large before focussing in on the individuals at the heart of the story. It’s worth quoting from all of them, but this passage from “One Year After The Windrush” acts well as a summary.

However, this shade and darkness is counterbalanced by the playful side that comes out more towards the end of the collection, for example in “The Poetry Of Astrophysics”, where Underhill notes ‘Strange bedfellows, you say, poets and astrophysicists.’ (NB: poets and immunologists are fine – ask Mirolslav Holub).

However, the first stanza also serves as something of an ars poetica while talking about the big bang

There’s also something to be said in this stanza (and in many other lines in the collection, where we see anachronistic words and phrases slip in, for example ‘ultra-souped-up’ or ‘utterly foxed’. Elsewhere there are references to the ‘Eden project’ in “Enlightenment” and a ‘thousand suave satnavs’ in “Rookery”.

And “Rookery” is another of the poems where some more of Underhill slips through the net. In a poem that tells us that ‘iron age man/ practised excarnation. That rooks and ravens / picked the bones clean.’ we ‘re told at the end of tired man, with bones that ‘don’t flex as they once did’ and

In the poem that follows, “A Hint To Gardeners”, Underhill is not beyond making more of that pride—and this is perhaps deliberately placed here to continue that theme—when he opens the poem with

The stanzas of this poem take on the intention of the poem and adopt different lengths, although not too far towards the ‘sweet disorder’ he mentions later. As he goes on to say ‘too much precision / fetters the mind in captivity’.

There is much to be said for the forms used by Underhill. He often favours the long line, cramming in as much as can be said in each unit of thought: whether that is a line or a stanza. For example, in “An Endless Present”, a beautiful poem about leaves, we are told

While the stanza break and caesura offer pauses for breath, that’s quite a sentence.

As with the previously mentioned poem about astrophysics, there are several knowing nods to poems and poetry within these pages. There’s the ‘outworn metaphor’ in ‘An Endless Present”; in “Enlightenment” there is much talk of the ‘skaldic skill” of Norsemen, and ‘the stanzas of God’s universe’. In “Allegory Of The Cave” poets are set up against philosophers and win—of course.

I mentioned earlier that it took until the end of the collection to be convinced by it, but since completing that first reading I’ve found myself gravitating back to it for further study, and reflecting on its ‘bejewelling [of] lives and times with words’.
.