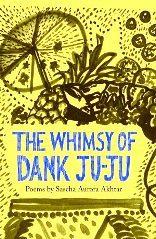 In keeping with the title, a dark undercurrent runs through these poems, a note of rebellion and not taking things at face value. The book starts with “Girl Child of the Eighties”, referring to a time when big hair and perms or crimping was all the rage,

The little preened doll who could become anything within societal norms – ‘angel face, bridal dream’ – first has everything and then becomes everything, ‘I am ’em all’. This isn’t a girl staying tidily on the shelf, but someone reaching out for experience and wanting to be fully in the mix of whatever life might bring. A tough heart behind an angelic face. But also one that is intelligent and observational, in “Matutinal”

The speaker has a garden to herself in the early morning before the dew has cleared. The soft, susurrus sounds create a sense of hush, underlining the air of secrecy. The ‘sky-dome’ echoes the sense that this is a personal, enclosed space, not one the speaker wishes to open out and share. Akhtar often refers to eighties’ songs and here there is perhaps a suggestion of Prince’s “Under a Cherry Moon”, a small, intimate space of private passions. “In Between Days” shares a title with a song by the group Cure, about the aftermath of an ended relationship. Here though, it’s more about being in limbo,

This describes a breathing space in the commuter rush to stop and watch a bridge open to allow a ship to pass through. The reference to ‘t.s.’, i.e. T S Eliot carries an implication of the past repeating itself in the present day; a contemporary narrator is seeing the same sights as the famous poet once did. Time is passing, but nothing is changing. There’s a passive acceptance of routine. Later, however, the Ju-Ju surfaces, in “Chaos Totem”

In contrast to “In Between Days”, the language here is more active with a note of optimism. The big fear of the 1980s was a nuclear war so here there’s a sense of looming disaster on the horizon in ‘nuclear sun’, something distant that may or may not happen. But the addressee is dreaming of significant days to come, enough for a new dream every night. There’s an implication of plans being made, a future to look forward to, whatever tomorrow brings.

The Whimsy of Dank Ju-Ju is a collection of poems in which careful selection of words reinforces their meaning. The poems are also well-crafted in terms of rhythm and sound and so I found myself in places stopping to read them aloud, to bring those sounds alive. Akhtar brings a controlled energy to her poems that rewards re-reading.
.