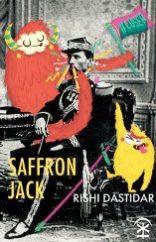 It is nearly two years since I last wrote a business report. Thank goodness. So, my heart sank a little when I saw the numbered and sub-numbered layout of this book length poem/sequence. I did not let it my personal shudder at the thought of work spoil my enjoyment though. It proved a good decision as Dastidar has written a splendid updated riff on Kipling’s The Man Who Would Be King with the slant of migration, and the present politics of identity. Currently this is essential reading. It matters.

His Jack takes the Eurostar to the nearest war zone – an un-named country erupting in civil war where ‘Everyone pasted their particular allegiance on their front door….So it wasn’t hard for the opposing team to find them’ (44) – in order to declare himself king: ‘You are a king. Until someone points a gun at you.’ (15). The poem opens with Jack fiddling with his cheap crown (‘£9.99… from Argos’ (30)) and pondering the nature of his kingship: ‘He’s brown. Brown people can’t be king/ Can they?’ (31.1). Between the musings and self-talk – where the poem’s structure suits these sub-thoughts and asides – Jack returns to his crown, then rummages in his ruck sack for his sceptre and so on.

It is a drama played out in one room before his new country is invaded. Jack is periodically reminded by mobile phone that he has one hour to get out, take nothing and leave. The whole set up has Becketian feel in its starkness. Part poem/part play, I’d be very happy to hear this coming over the airwaves to me sometime soon. I hope it finds life in that form at some point too.

There is a great deal of humour in this piece – in that darkly comic way so needed to break the tension and danger. I especially liked the idea of a couple on the Eurostar ‘so bored they started the Mile-below club’ (57.3.3), the cabbie ‘with an unused PhD in International Relations’ (77.2.2).

Interfused with the set up are mediations on the nature of being an immigrant; howls against racial profiling; and racial abuse. It is a tough read with reminders of constant threat. Dastidar has written a piece that is both challenging and witty. It is hugely worthy of your time. You will not be disappointed by the Union Jack and the other badges of a country that needed spicing up a little.
.
Kate Noakes