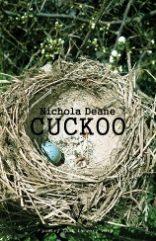 The main thing you notice about Cuckoo, Nichola Deane’s debut collection from V Press, is the names. The work teems with characters, from poets (Auden, Lorca, Ahkmatova, Edward Thomas), to artists (Klee, Cornell, Hockney) to politicians (Thatcher and Pinochet, somewhat gruesomely), to members of Deane’s family. The effect is of some extended crowd scene, where the sense of scale offers parity between the familial and personal, and the historical and artistic.

The key thing about a crowd scene is that it is filmed from above. In fact, the idea of height and distance is a key theme of the collection, implicit in the choice of a bird as its title figure. It’s there in an early poem, “D Day”, which fuses the historical and the personal with its epigraph ‘to my maternal grandmother, B.E.H., i/m.’. The poem opens:

This is an early example of Deane’s ability to offer us personal subjects with a sense of scale and distance, which goes beyond historical writing or the ambitions of the epic. Thomas Tranströmer (one of those names again) appears as a tutelary figure of the collection, source of the opening lines of the short poem, “Bee Griefs.” Tranströmer had been described as the ‘buzzard poet’, for his method of offering his subject matter as though seen from a great height. One might describe Deane as the ‘cuckoo poet’ for the way she represents her family history under similar conditions. In another short poem, “To The Hour of My Birth”, Deane offers us the most intimate of scenes with a dizzying sense of vertigo, which in its ten lines reminded me of ‘Cosmic Zoom’, https://www.youtube.com/watch?v=VgfwCrKe_Fk Eva Szasz’s animated short film depicting the interplay between universal and the particular. ‘What’s near is distance./ What’s dear is far’ the poem affirms, as it depicts the essential strangeness of the unknowability of our origins and ends.

“My Father At Eighty-Six Among the Clover of Happy Valley” extends the same idea. Deane offers us a transition from a patient description of an elderly parent’s movements (‘felt the pain/ of the pronouncing curve of his spine/ heralding like the curve of a horn’) to a consideration of the nature of the material universe. ‘Who can learn/ to not resist the ground…?’ Deane asks, before continuing:

How do any of us walk, when the universe is in flux? These lines go beyond history and a sense of the epic, into something both larger in scale and, weirdly, more granular. This conceit, of constantly framing the personal and intimate against larger concerns might seem aloof, but actually brings the intimacy into sharper relief. “My Body As Accidental Cassandra”, a piece notable for its more relaxed tone, details the poet’s allergies: ‘my right arm prickles/ at the elbow like a witchy message being tapped / from the ectoplasm.’

In “The Lift”, which focuses on an encounter with the jazz musician Chet Baker (who died in a fall from a hotel window), Deane offers us the following contemplation on the relationship between our yearning for height and the gravity which always pulls at us:

Bringing us firmly down to earth, “Men”, the only prose poem in the collection, describes a confrontation between drunk football fans in the cramped confines of a rail replacement bus. ‘Not all men!’ I wanted to call out, until I realized that there’s something we all might have to answer for in its depiction of silence in the face of toxicity and rage. With its agonizing sense of public disaster, depicting the figure of the narrator almost furiously recording the event as a way of escaping the threat of violence, really, this piece defines Cuckoo as a whole: a small space teeming with characters, with Deane at the centre, relating the exchanges with imagination and insight.
.
Daniel Bennett