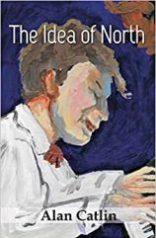 In The Idea of North, Alan Catlin meditates about music and noise in the way he considers art and sight in Asylum Gardens. Just as he addresses the visual through works by Van Gogh, Frida Kahlo, Diane Arbus, Man Ray and others, so he addresses the aural via a consideration of Glenn Gould, the eccentric Canadian pianist. “The Idea of North” is, after all, Gould’s 1967 documentary of sound, the best known work in his “Solitude Trilogy.” Gould commented on his work that “…like all but a very few Canadians I’ve had no real experience of the North. I’ve remained, of necessity, an outsider. And the North has remained for me, a convenient place to dream about, spin tall tales about, and, in the end, avoid.” Catlin writes in “Glenn Gould’s Unrealized Dream of a Winter”:

Born with perfect pitch, a piano prodigy, Gould played in public for the first time at the age of five. At thirteen he performed with the Toronto Symphony. Renowned as an interpreter of the keyboard works of J.S. Bach, Gould toured the Soviet Union in 1957, but after a 1964 performance in Los Angeles at the age of 31, he gave up concert performances entirely, convinced that they were “a force of evil.” Instead, he turned to the studio in his search for sound. In the poem entitled, “Bless Glenn Gould for throwing the concert audience to the junkyard – Marshall McLuhan,” Catlin writes:

Catlin highlights all of Gould’s eccentricities: his insistence on Poland Spring bottled water in his dressing room; his aversion to cold, which caused him to wear warm clothing, including gloves, all year round, even in warm temperatures; his hypochondria; his insistence on soaking his hands in hot water before performances. He writes in “Glenn Gould soaked”

Gould suffered a stroke, dying at the age of 50 in a Toronto hospital. In the final poem of the collection, “Inside the studio,” Catlin writes:

The poems in The Idea of North explore ideas of composition and sound through Gould’s work, his passion, and the peculiarities that drove him and were probably responsible for his early death.