The Blue Vampires,
Launched online on Vimeo, by Simon Procter.

In more ordinary times, Simon Procter is a British fashion photographer, who has worked with Karl Lagerfeld and John Galliano. 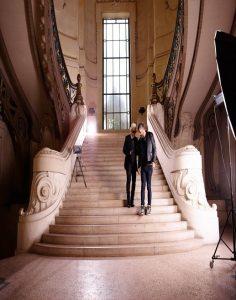 In common with millions across the world, his life has been upended, to use that suddenly fashionable verb, by the novel coronavirus.

An exhibition and signing of his book Lagerfeld: The Chanel Shows, meant to take place in London in March, has been postponed, while the task of finding the most dramatic angles on the catwalk has been replaced by entertaining the kids during lockdown.

Procter’s solution is to rope the young Procters – his daughter Brune, 15, and son Loup, 11 – into the serious business of what is billed “as an autobiographical tale of my early life in Paris”, starring Simon Procter and Greta Garbo.

It takes us into the world of Paris in 1910 when desperation and hunger were rife, the Blue Vampire gang rampaged and the young Procter, the detective on the vampire case, met a femme fatale (Garbo).

Forged from film extracts from 1910 to 1925, just before, during and after World War I, it’s as much pastiche as parody, as Procter, with technical support from Brune and Loup in a kitchen-for-a studio, sustains a web of gothic clichés for a fateful 13 minutes and 13 seconds.

Entertainment, more than high art, as were many of the silent movies to which it pays homage, it’s also a warm-up exercise as this documenter of the often fantastic world of fashion shifts his focus to the make-believe of film, with a mysterious project named Lapin Noir. 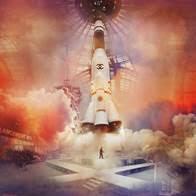 It may also prompt future historians, pondering the outburst of lockdown creativity, to debate the impulse to dive into earlier times of economic and social upheaval and to confront supernatural evil forces rather than tackle head-on a crisis that is still too raw and chaotic to process.