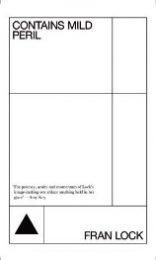 Poetry review – Contains Mild Peril: Daniel Bennett admires Fran Lock’s poetry for its blend of the imaginative and the concrete

Grief and cerebral rage combine in this, the seventh collection by Fran Lock. The work is by turns intimate and associative, possessed and deadpan, and culminates in the prose poetry sequence ‘dead /sea’ which may not book Lock a slot on Poetry Please, but confirms her reputation as one of the most daring and intelligent poets of her generation.

The title of the collection comes from the frequently absurd warnings of BBFC film classifications, and odd references to cinema echo throughout the poems, from ‘Loneliness Of The Long Distance Runner’, to ‘Valery in Zombieland’, to ‘Epistle From Inside Sharknado’. Shortlisted for the National Poetry Prize in 2016, the judges saw this poem as an environmentalist’s revenge, but, really, it’s about the film: a homage to the instinct to make our insane fears manifest in crappy CGI wonder. Another film poem, ‘Giallo’, picks up the tropes of grotty Italian crime cinema: ‘Put your hands on me./ Your housebreaker’s / gloves. Recidivist kink I buck and sway with. Ply my snide / arousal like a pro. A blonde wig and a change of clothes.’

The collection also acts as a reminder of what a fine writer of urban experience Lock has become, treading a careful path along post-Iain Sinclair clichés of psychogeography, conjuring an emotional response to the city that is part Elizabeth Bishop and part, well, Travis Bickle. Few writers possess her eye for urban detail, in the warnings of inequality of renewal in ‘Gentry’, or ‘Hippy Crack’, inspired by the litter of nitrus oxide capsules, or this from ‘The Rites of Spring’:

Here come the dogs. Sooner or later in a collection by Fran Lock, you’ll encounter the dogs. They leap out at us from the pages of Contains Mild Peril in such titles as ‘Citizen Pitbull’, ‘And I will consider the yellow dog’, ‘Remedial dog’; they wait within the verse, ready to pounce. Take this, from the opening of the sinister monologue of Irish feuds and families, ‘Gentleman Caller’:

In a review of Kingsley Amis’s letters, Ian Hamilton once used the phrase ‘zestful hater’ to describe the young Amis during his time at Oxford. I doubt a comparison with Amis is one that often comes Fran Lock’s way, but I was reminded of the phrase at odd moments in Contains Mild Peril. As pursuits go, hating gets a bit of a bad press these days, but if you’re focusing your negativity on such targets as Kirsty Allsopp, Bono, and plagiarists, then you’re probably onto something. Whatever, this ire is as much a spirited preparedness to cut through unthinking bullshit. Elsewhere, Lock engages with cliché, both to re-evaluate the use of language and also to examine the thoughts that we allow ourselves to recognise as commonplace, or even acceptable. It’s there in the titles of ‘The seven habits of highly affective people’ (‘I can see myself, recalcitrant and aspy, and striking/ a match on my noseblown sleeve’) and ‘Everything Happens For A reason’, (‘I have friends who say this’) one of the sequences from ‘dead/sea’.

Yes, ‘dead /sea’. We need to talk about ‘dead/sea’. An extended invocation of the sea and a drowning, it’s hard to think of a contemporary poem which matches the work here for sheer mental energy and range. I found the piece to be a reading experience of rare intensity: the voice permeating my dreams, as though Prospero, Caliban and Ariel had conjoined in some unholy choral ménage-a-trois, offering an island of rage and magic and longing, while the sea rose to pull them into its terrifying z-axis. Part of me wonders if prose poems are a little bit too common these days, and on opening a new collection to find it is mostly prose, my first thought is usually, ‘Is that all you’ve got?’ There’s no doubt that ‘dead/sea’ couldn’t have been anything else but a prose poem, however: a Woolfian event of depicted consciousness, that is less an act of freewriting and more a filibustering sermon at a wake.

Dogs, ghosts, spells, grief, the complications of Northern Ireland: for regular readers of Lock’s work, the collection is recognizable, but still manages to be consistently surprising and ambitious. I return to Lock for her effortless balance between the mental and the corporeal, for the balance between the mournful range of her grief and intelligence and her eye for the killer detail in the world around her. Lock, you sense, is a walker: accustomed to the ground beneath her feet however high or wide her imagination balloons. She is Leopold and Molly: spinning her mental yarn on a path across London and its boroughs, twanging the strained lead of a restless dog.

The Blue Vampires, by Simon Procter. Review by Barbara Lewis. Her Other Language