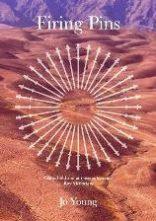 In her introduction to the collection, Young talks about how long the Army has been a part of her life and ‘how tightly fastened I was to my identity as a soldier’. The collection is threaded through with exploration of this identity and the impact of this fastening (and an unfastening – in the form of PTSD – towards the end of the book).

Young also shows us the differences in experience of military services between genders, something that is abundantly clear from the very moment the book begins. The pamphlet’s opening poem, “L’oréal Paris Infallible Gel Crayon Eyeliner in Browny Crush”, starts with a quote from the Queen’s regulations for the army about the wearing of make-up. They state that for males make up must not be worn and for females, ‘Make up (if worn) is to be inconspicuous’.

The lines that follow could be taken either as a poetic manifesto or as a wonderful bit of reverse psychology on Young’s part. The first stanza states

The poem discusses the application of eyeliner behind ‘foggy panes’ or ‘helmet-hidden’ while the poet talks of wanting to have it seen in some way: ‘I want to beam / all this through rifle sights’ and ‘I want to pin shade to my eyelids, / the skin folding back inside’. These are very raw images, but as the poem ends, they are ‘framed with softening care.’

But that opening stanza feels very much like a gauntlet truly slapped across the reader’s face. Of course, we can’t look away now, and why would we want to? The eyeliner of the title serves to highlight (no pun intended) a recurring motif or theme that crops up throughout the book, that of the eye. The eyes and the urge to look away feature strongly; and there are moments when we sort of have to. For example, in “Lying in a Dark Ditch and Concerned About Your Photoreceptors”, we’re told

And the eyes have it elsewhere in the collection, for example in the immensely powerful sequence, “Lost Things: Afghanistan (i-vii)” that sits at the centre of the book. This poem documents, among other things, a surprising list of what can be lost because of being in a combat zone. The list includes, for example, trust, opportunities, the colour green, friends, and deadweight of cheating partners.

This last example is one that holds our gaze and meets our eye, and the gaze is both inward and outward..

In the final poem of the collection, “Triarii”, there are more subtle nods to eyes and looking as we ‘roll a glance to the tin-grey sky’. But, to hark back to the earlier manifesto point about not looking away, we have to stick with it till the bitter end. (Although since this was written in the original Latin of ‘ad triarios redisse’, I did literally have to look away to look it up. However, this says more about me than Young.)

The eye is further engaged throughout the book by Young’s use of form. The poems move from traditional stanza structures, as in the opening poem, through to more modern forms like the Golden Shovel of “Principes” and the longer lined and almost prose-poem form of “Hastati”. And, of course, there are actual prose-poems in “Intertidal Rifle Range” and “Flexitarian”.

“Flexitarian” is worthy (not that the others aren’t) of a separate mention. It feels akin to the work of Caroline Criado-Perez and her work exposing data-biases against women. The poem documents a longitudinal study on female soldiers and its concluding line (not to discount those that precede it) is a proper pool-ball-in-a-sock to the jaw. ‘[These bodies ARE the frontline]’.

The poetry of war and the military is something that we rarely see from the point of view of anyone other than men, and so it’s refreshing to see someone coming at it from a different angle. Please note that when I say refreshing, I’m choosing to focus on the benefits of the author’s different angle. War is, as we all know, bad. At the risk of outright reductionism, I have to say that Firing Pins very much isn’t bad. It can be hard work, but it’s rewarding work.