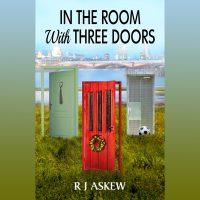 In The Room With Three Doors by R J Askew
Available on Amazon Audible and in print and ebook form.

Could the written word as an art form have peaked?  It depends who you listen to – or what you read: the PRs touting a lockdown resurgence in physical book demand or the wave of fitness fanatics locked out of their gyms, resorting to jogging and preferring to hear the human voice through their surgically-attached headsets to the sounds of resurgent nature?

Personally, lockdown has given me the time to overcome the technical barriers to listening to my very first audio book, but I’ve yet to overcome my reluctance to having an interpretation dictated, even if it is the author’s own.  It feels limiting – for the author as well as the reader.  Even broadcasts of Dylan Thomas reading Under Milk Wood send me scouring my bookshelves for the text.

But I know I’m not everyone.  Audio books are on the rise and social media are creating their own grammar for the youthful audiences I sense are the prime target for R J Askew’s  In The Room with Three Doors, released on Amazon Audible in March.

It’s an unabashedly optimistic tale that counsels 25-year-olds to believe in their dreams and in love, which, without giving too much of the plot away, is the room and in theory the three doors into it only open inwards.

It’s also the story of the City of London as a crusher of hope, even life, and it’s an idealisation of Celtic in-tuned-ness with the rhythms of nature, embodied by the novel’s heroine Rhi, short for Rhiannon, who, as the sole surviving twin after a London cycling accident, lives and loves for two.

She convinces her two lovers not to be jealous and redeems the wealthy but emotionally barren 50-year-old father of one of them, convincing him to bankroll their lush, green fertility and watercress health farm somewhere in Hampshire.

The biggest justification for producing this as an audio book, read by Askew in his slightly northern, rather than a Welsh accent, is that the 25 year-olds speak in the poetry that is the author’s natural medium and he makes it their own as he and they rhyme and turn their phrases.

Whispersists becomes a verb, “a selfie of self” is deliberately tautological, a wall is “war-eaten” and if you’re ugly in this world, where beauty holds sway and a kiss is not any old kiss but “the kiss of your life,” you’re not just ugly, you’re “ugly bugly”.

At its best, it is both gritty and idealised and the strongest moments are of conflict not love.

I doubt the irony would be lost on the author that those who listen to the standout scene, in which the heroine throws her lovers’ mobile phones into the murky Thames, are probably doing so via the very devices that symbolise our enslavement.