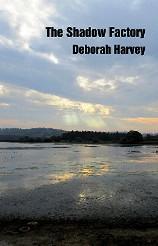 I know where I am with Deborah Harvey’s work, both in its use of locations and in its content. Deborah is an accomplished poet from Bristol with four collections and a novel to her name. She is consistent in her motifs and at ease with her poetic language, which seems to flow seamlessly onto the page and into your ears. Her work is accessible, full of evocative detail and at the same time is underpinned with a deep understanding of her world. She has long been committed to writing about sense of place and specific locations, mainly in the South West where her ancestry lies. She researches the local history as in, “Heron’s Green Bay”, or the title poem of her collection, a derelict factory built in 1937, to provide aircraft for the coming war. She brings to life, events and people associated with them.

On first glance, The Shadow Factory seems to meander through an array of topics including: a sequence of ekphrastic poems about the Surrealist artist Leonora Carrington, a poem about the dogs of Chernobyl and a witty poem “Old Moulder’s Almanac” making fun of astrological signs with increasingly dark explanations, ‘graves heave and pitch, corpses complain of feeling sick / while the stillborn slumber on, rocked in their cribs.’ On a closer look, shadows increasingly flit in and out to bring a wholeness to the collection, that I found ultimately satisfying. There are shadows of ghosts, ancestors and even evil, as in her poem “Sensible Shoes”, about a nurse colleague who once spoke of refusing a lift from a persistent Fred and Rose West. The shoes embody her character and how that pragmatic sensibility saved her life:

Death is a recurring shadow, as in “Nature Notes”, about three women murdered by their partners and an extraordinary poem written in the voice of a corpse, “where he lay undiscovered”. This poem details his decay and consumption by nature’s insect scavengers. The loss of the poet’s father is also a central theme. Her wreath of sonnets, “Black Seeds”, was written about his death and whilst tender, it is unsparing in exposing the shadows held within and is one of several poems exploring their complex relationship:

In the context of the poet’s portraits of her father, I am reminded of the title poem, “The Shadow Factory” with its image of a factory built for war that has outlived its purpose and lingers as an empty shell waiting demolition.

Another major aspect of the poet’s work is that of nature– ever-present, sometimes as a primary focus as in “Touchstone”

Nature is also woven into domestic and relationship poems. “Try Yoga”, is about the yawning gap between an elderly mother and her daughter, who makes efforts to care for and please her ‘She takes a sip of Earl Grey Tea, it’s made / just as she likes / a smidgen of milk, a teaspoon of sugar / (slightly heaped).’ Mother’s advice, meanwhile demonstrates a disturbing lack of knowledge of her daughter,

The poem ends with an affirmation of the daughter’s true nature:

The penultimate poem “Heaney’s Wake”, uses an encounter with a fox to affirm the poet’s own wild spirit: