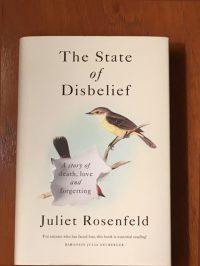 When he lost his daughter to Spanish flu, Sigmund Freud, the founding father of psychoanalysis, was forced to acknowledge that no amount of time on the couch could overcome some kinds of loss.

Psychoanalytic psychotherapist Juliet Rosenfeld published her meditation, as her publicist so aptly describes it, on her own journey from an intellectual understanding to a deep, personal grasp of Freud’s distinction between harrowing grief and the gentler sorrow of mourning in February – when today’s equivalent of Spanish flu had begun to throw wives, husbands, children, lovers across the globe into states of emotion they may never fully process.

For many, it may be years before they can even focus on a page, let alone draw solace from the perspective of a writer who is so obviously privileged the initial temptation is she doesn’t need much sympathy.

But, as Rosenfeld makes clear, no amount of money, class, education or a chief executive’s determination to control is ultimately a match for the unbelievable fact that we cannot defeat death.

When we feel utterly alive, it’s almost impossible to accept that one day, we will be nothing and it’s too terrible to imagine that the person we love most may also have no choice but to leave us – hence Rosenfeld’s title, which reflects her disbelief that she finds herself a widow only months into a marriage.

Writing about unbearable unhappiness as the price of short-lived happiness is therapy, as Rosenfeld is highly aware, but the dignified and original part-novel, part-textbook she produces is anything but indulgence.  This is not a misery memoir.

As a novel, it has two protagonists, Rosenfeld, the narrator, and her late husband Andrew Rosenfeld, whose habits, phrases, charisma and drive she brings back to life.  It’s a love story and, like every love story, it has the potential to be a grief story, to borrow from Julian Barnes whom Rosenfeld finds herself reading in the nightmarish days just before she is bereaved.

As a textbook, it’s an accessible account of the wisdom and limitations of Freud and an explanation of a few central concepts, all in one way or another referring to interpretation of past experiences whose latent meaning must be unpicked if we are to move on and cope with the present.

The combined effect is cumulatively moving.  It’s hard not to shed a tear at the extreme violence of the final stages of Mr Rosenfeld’s battle with cancer.

Whether it would help anyone else who finds themselves in the same situation as his widow is an open question.  Every bereavement is a personal journey.  If we are to carry on living, we have to find our own ways to function again with or without analysis.