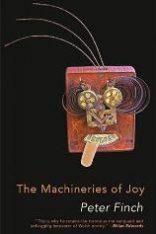 Poetry Review – The Machineries of Joy: John Forth seeks to do justice to the sheer range of Peter Finch’s poetry

If you wanted to identify Mr. Cosmopolitan Poetry Wales you’d look no further. Anything that happened during the past fifty years, Peter Finch was either only-begetter or, if it was bigger, chairman. His direct influences are traceable everywhere from Bob Cobbing to Captain Beefheart, and if his were a whistle-stop train there is nowhere it won’t stop. Everyone will find things to love in his latest collection, and some that pass like a train. William Carlos Williams said that a poem is a machine made of words and Finch has been for two generations making every different kind of machine he can lay hands on. So it’s a little surprising to find the title poem of a collection of his last ten years’ work somewhat mainstream, if a little edgy:

A woman customer complains that, costing less (especially in bulk), Bach’s work is outselling her husband’s, a man driven by an obsession to carry on writing:

So the purveyors of joy contend, with varying success, to survive in a market economy. Nothing to see here, as the police say, except a surreal opening bid pitching Bach beside pet-food. There’s a hint that we know the price of everything and nothing about value, and an inference or two of cliché being at its best when buried under several fathoms of received wisdom. Apart from that, just some run of the mill disjunctions and a topsy-turvy take on the everyday. But hang on a minute…

When Carol Rumens selected ‘Fish’ as her Guardian Poem of the Week https://www.theguardian.com/books/booksblog/2020/mar/16/poem-of-the-week-fish-by-peter-finch she was able to use it as a guide through Finch’s long career by giving us a cautious tour of its innards. This was a must for one, like me, ‘flailing in the Welsh fog’. The first section is a romp through the poet’s early reception beginning with his own assessment of the kind of catch he’s famous for:

which was shown to John Ormond: “You’ve energy, Finch, but / they’ll not put that on your grave” and ending with the anonymous “Beer mats, they read better, boy”. We see that the words of even onboard critics are to Finch like water off some fish’s back. To Chopin’s You are a poetic nation without competition, the speaker replies “this is / an incorrect claim. Wales is a nation of / standard-stoppages / engaging with pasteurised modernism / forty years outside the frame.” The standard stoppages apparently allude to Marcel Duchamp’s ‘experiments to imprison and preserve forms’ to which the speaker concedes:

Since Amis wrote much claiming that formal standards have been falling since the Greeks, it seems to me there might be more anger here than Rumens is identifying, the self-accusation being more bitter than it seems at first sight when you consider that it ends the poem:

Rumens finds this ‘terse dignity’ to be ‘wholly unobjectionable’. I’m afraid it looks to me like someone might be forgiven for assuming that Amis was taking the piss, otherwise why give the quotation such prominence? Yet she is surely right to imply that there is good will here. What else might he have left to prove?

Finch is always quick to justify his methods. His note on an earlier poem drawing on R.S Thomas would serve as a manifesto for most of his collections including this one: “With so many words why make more? These resources exist and need to be proclaimed. There is a thin line between data and information and another one between information and art. I am in the business of crossing these lines.” A perfect example of crossing any number of lines is ‘Hendrix Island’, a myth which appears to have begun with fake news initiated by Finch himself in ‘Real Cardiff One’ and published by Seren in 2002. A fictional 1970s visit was supposed to have resulted in Hendrix waking up lost on the island. In 2014 Made in Roath installed a blue plaque and in 2016 a writer in the Western Mail speculated about which of Jimi’s two actual visits to Cardiff (both in 1967) resulted in the stranding. If I’ve misunderstood any of this the story will grow of course, but in the meantime here is the poem:

It will become evident, if it hasn’t already, that I’m selecting poems that interest me and leaving others of the 64 included here on one side. Any review works this way, but a Finch collection can only ever work in this way, because of his huge range of games and mock-ups. List poems, prose poems and poems combining visual & textual elements are interspersed with poems I referred to earlier as ‘mainstream’ (for want of a better word) – but wherever there is a clear surface the sharpness of direction is unmistakeable. The road movie that begins the book in Wales heading west might be the work of a latter day Beat Poet:

If he’s seeking a celebration of Robert Johnson, one of the founders of modern blues music, he’s soon disabused because now the blues men are ‘dead-end history. Ghost riders’. In Wales there was a plaque for an event that never happened. Here in Johnson country,

Accounts like this of the way artists are unremembered even as we try to remember them are numerous now, always chastening even as they become less and less surprising. I’m told you can tramp the whole of Boston without finding anyone who’s even heard of Robert Lowell. That’s how it is. And it’s in reporting how it is that Finch really hits his stride, time and again. He won’t put a foot wrong even when the threat of coochy-coo is at its peak:

Scarlett as a poem obviously predates Greta Thunberg’s fame but as a baby she’s right in there with the fixing generation. There have been other unsentimental takes on the baby photo, but this seems to nail it, and in a visit to Capodimonte (‘the Italian National Gallery’) there’s a startling equality of kitch and passion:

Jamie Wilks describes an earlier poem ‘Fold’ as being ‘poetry as origami, a folding that is also an unfolding’ and there’s a similar sense of unfolding in ‘Capodimonte’ which presents a long series of artists and figures to get to the closing lines quoted above. It’s a kind of exfoliation in reverse producing a similar outcome. Of another earlier book he wrote, “Aficionados of technique will find the found, the extracted, the bent and processed, the recycled, the cut and pasted, the masqued, the flailed, the rubbed, the ripped and the repeated here.” Same as here, then. But there are enough poems I would return to if only for the sheer range of his interests, and of course it would not be only for that.