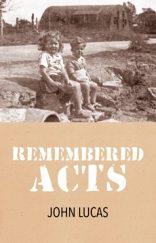 In this, his fifth novel, John Lucas tackles a familiar theme of unravelling a mystery. Readers of his previous fiction will know that ‘unravelling’ is never simple, often leaving questions about whether historical events can really ever be resolved completely. In the case of Tom, the principal 70-year-old character at the centre of the story, that is certainly so.

Tom Goodings is a retired businessman – although he hates that word – who has left the City to retire to Chalcombe, a village in Devon where he spent family holidays immediately after the war. Seemingly, his life with his wife Mary should be idyllic, yet straightaway we are made aware of a discordance when, on a walk above the village with his son Charlie, a London journalist, he remarks vehemently about the bungalows tacked on to the old village: ‘They should never have been built.’ This starts off the puzzle for Charlie and for us: what lies at the back of Tom’s seeming discontent at what should be a blissful new life in his later years?

We soon learn of the political and social disagreements Tom has with other residents, particularly over the miners’ strike and Thatcher, a theme that runs throughout the book. However, we learn that Tom’s discontent with his lot has deeper roots than a simple realisation that he doesn’t fit in with the self-satisfied new villagers who have, ironically, like him, taken flight from business. In a conversation with Charlie – cleverly retold to us by Charlie as he relates it to his wife, Sophy – we learn Tom has been increasingly troubled by an event at the end of the war when he allowed a troublesome fellow soldier, Stockdale, who he was supposed to be guarding, to scarper from the barracks to see his supposedly ill wife in Middlesbrough. It turned out later that Stockdale certainly got to see his wife but then murdered her in front of their two children, Sally and Frank.

It is this sense of personal, if indirect, responsibility that has haunted Tom in the forty-odd years since, but which now is assuming a greater and greater influence on his life. It hardly needs saying, that his increasing ‘obsession’, particularly with what might have happened to the Stockdale children, puzzles and perturbs his wife and his two children, Charlie and Fran. ‘I think he’s making too much of what happened all those years ago.’

The challenge for Lucas at this stage is to convince us not to form the same opinion, and hence lose patience with Tom and what turns out to be his mission. He does this marvellously well, however, by making us believe in Tom’s intransigence and his need to, as Charlie quotes from Macbeth, ‘minister to himself.’ We also discover how difficult it was for Tom to find work after the war and how hard it was for Mary to cope with missing her husband for six years. By locating the story in the couple’s personal history over more than forty years, Lucas gives substance to Tom’s desire both to solve the mystery of what happened to the children and also to atone, if he can, for what he sees as his own negligence. The skill with which Lucas does this is what compels the reader to stay with him. As Charlie tells his sister at one point ‘Dad was brought up believing that husbands should always do their damnedest to keep their wives from harm. And in this instance, harm means the haunting that’s got him by the throat.’

Tom’s search for the present whereabouts of the Stockdale children, Sally and Frank, leads him to a village near Mansfield. Here he is shocked to find Sally a confident and accomplished mother, wife and artist. In a brilliantly written encounter, it is Tom who is rocked back on his heels and on the defensive, especially when challenged about certain subterfuges he has used in order to track her down. Moreover he is still not satisfied because Sally does not know what happened to her brother (who turns out to be her half-brother, a product of a wartime ‘shudder in the dark’). Tom continues to infuriate his family by refusing to give up, even though the search seems to have reached a dead end. However, Lucas introduces a surprise element via Sally’s husband – which must remain a mystery until you read the book.

Lucas ranges far and wide in the novel – both geographically (Devon, London, Mansfield via a ‘small, and as far as he could see, non-descript town called Beeston’, the routes that Tom travelled with his tanks, Bishop Auckland, Middlesbrough) and historically (Greenham Common, the miners’ strikes, the war). One thing I must correct, however: Tom, in an unlikely moment of reflection on Sally’s husband’s accent, recalls how the police at the time of the Yorkshire Ripper were misled by a hoaxer. However this hoaxer was from Sunderland, not Tyneside, and known as Wearside Jack. Three further women were murdered because of his ‘mischief’.

By having parts of the story told by different members of his family, Lucas meshes the whole experience into the lives of others rather than it simply being about Tom. And that’s one of the telling points of the story: that others have to live with the issues you face even if you think, like Tom, you are protecting them.

But as much as anything, this is a brilliant portrayal of the latter stages of the ageing process whereby the individual wishes to resolve unfinished troubles. As Tom gets older, that one moment of indiscretion, in which he unwittingly enabled a murderous husband to take revenge for his wife’s wartime infidelity, assumes a greater and greater significance. It is well worth reading this hugely enjoyable, beautifully written book to find out whether or not the whole issue is sorted out.