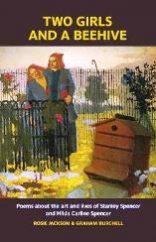 WHEN WE LIVED IN HEAVEN: William Bedford considers Two Girls and a Beehive – a new collection of poetry by Rosie Jackson & Graham Burchell

The art and lives of Stanley Spencer and his first wife Hilda Carline Spencer have been told before, but rarely with such heart breaking and intellectually fascinating force. Not the least impressive aspect of the work is the dual authorship, in which Jackson and Burchell achieve a unity of voice while allowing their own individual gifts to shine through. Authorship is identified in the ‘Contents’ list, but not on the individual poems, so you are free to read each poem as though anonymous. Ekphrasis makes enough demands as a genre, but for two poets to ‘voice’ the genius of a great painter is something unique, at least in my experience.

Born in 1891, Stanley Spencer was an adult through both world wars, the murals in the Sandham Memorial Chapel at Burghclere drawing on his experience as a medical orderly in Bristol and Macedonia. Even before he enlisted, the 1915 painting ‘Mending Cowls, Cookham’ showed the influence of the conflict, explored here in the poem ‘Cowls,’ where the Cookham cowls are a reminder “of a religious presence / in this time of war”, veering “towards him” as if to say “have no part in it”. The religious dimension of course is suggested in the ambiguity of “cowls,” which may be chimney coverings or a monk’s hood. In ‘July is a Dry Month,’ “Everything is war and emptiness”, hospitals “vile” with “bed pans, blood, bandages”. In ‘Macedonia, 1918’ the devastation is overwhelming, Spencer determined that “One day, back in Cookham, he will turn this into pattern / and meaning”. He makes a commitment in ‘The Resurrection of Soldiers’ that in his work “It’ll be like heaven / on earth”. Memory is significant throughout Spencer’s work, and as early as 1919, in the poem ‘Travoys with Wounded Soldiers,’ which shows wounded soldiers arriving at a dressing station, he tells us that years after the experiences:

But again significantly, we see “The fan of horses at the entrance / trailing cargoes of hurt men, / as if delivered for divine healing”. The divine was always there for Spencer.

For me, Hilda Carline is the most moving and complex figure in this story. They met in 1919, when Hilda was studying part time at the Slade School of Art. Henry Tonks was her tutor and great influence. She married Spencer in 1925. Years later, “She rarely paints / now, but remembers what Henry Tonks taught her // at the Slade: to keep practising the shape of eggs – / the way they take a lifetime to perfect”. It was a lifetime hardly likely to encourage her, the doctor in ‘The Psychiatrist’ telling us that Spencer “is able to be that bit of God / who goes on creating, no matter what./ Death does not exist for him, so there’s less need to grieve”. The psychiatrist, Charlotte Murray, was another of Spencer’s mistresses.

The marriage began to fall apart with the arrival of Patricia Preece. “Here it is in black and white” ‘Photograph, 1928’ tells us, “the moment / when the penny should have dropped”. Painfully, Hilda sees herself as “the wife who knows but cannot stop / her husband’s wandering”. In ‘The Psychiatrist,’ Stanley’s psychiatrist saw “malice” in Preece’s behaviour, the poem ‘Patricia Preece’ noting “gold-digging forepaws”. The harm done to the Spencers’ daughter Shirin is what distresses Hilda in ‘Elsie’: pushing “the corner / of a teacloth around a saucer. She looks unhappy,/ bothered by the dishes; a tower of Babel before her”. Preece “clipped my babies’ wings,/ taught us all to drink vinegar”, Hilda says in ‘The Apple Gatherer,’ and perhaps most movingly in ‘Fantasy of Hiding in the Greenhouse’:

After a serious breakdown, involving nine months in a mental asylum, Hilda’s self-criticism is difficult to read: “I allowed it all to happen” she says in ‘Seated Nude’, so that in ‘Hilda with Bluebells’ she is left with the “grief which has pushed her off / the shelf of herself, a body which has seeded / cancer”.

There is a clear aesthetic to be found in Stanley Spencer’s art, an aesthetic the poets share in their poems. ‘Of Angels and Dirt’ tells us that while we are “scanning the clouds / for some moment of white revelation,” the painter is “sketching those torn leaves of wild rhubarb”, capturing in detail “the unheard-of frequencies” where truth lies hidden. “Paintings,” Spencer believes in ‘He Taught Them Many Things by Parables,’ “are like dreams,/ their meaning not always in the foreground / but in hidden details rarely noticed / at first glance”. In ‘Lady in Green’ it is the images which create character, devastatingly in ‘Portrait of the Artist with Two Wives’ where a glowering Patricia Preece is caught in a simple phrase, “her hair the colour / of ripe hay,” the “ripe” doing all the work. Love is caught in domestic details in ‘What Else Did They Do?’ rather than the grand abstractions that obscure the truth. This will all be familiar to anybody who has read Wordsworth, a simple statement in ‘The Heaven That Runs Through Everything’ – “not ‘bird’ but swan, cockerel, grebe, quail, turkey” – resonant with the ideas the great Romantic brought to Lyrical Ballads.

Hilda Carline Spencer died in 1950, and for the next nine years until his death, Stanley Spencer went on writing letters to her. In a final sequence, ‘V. Love’s Return,’ one of the most powerful of these, written shortly before his death, – ‘Letter from Stanley to Hilda, May 1959’ – seems to capture some sort of recognition:

Or perhaps we should try to see Spencer from a distance, in the voice of the author’s own dual music, asking in ‘When I Think of Him in the Afterlife’, “where’s Hilda?”: