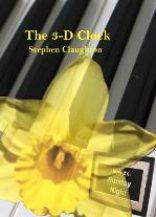 Stephen Claughton can surely take some satisfaction from having two chapbooks published more or less simultaneously. Yet perhaps this is not the most fortunate time for him to be promoting them since the current social isolation policy must be playing havoc with any schedule of readings that he may have organised.

Having read both books I would slightly give the edge to The 3-D Clock because it is a narrative collection and therefore shows Claughton’s anecdotal style of poetry off to greater advantage. Admittedly the narrative is a sad one since the poems recount the author’s experience of losing his mother to dementia; but the tone is far from relentlessly bleak. There is compassion and empathy throughout and even some recognition of the rueful humour to be found in misunderstandings and incongruities.

A prefatory poem in The 3-D Clock captures the initial wish to deny that anything might be wrong. When someone is unable to name the current Prime Minister it is easy to say ‘it’s hard: they change so often these days.’ But more worrying signs cannot be evaded so glibly. It’s hard to find a comforting explanation for someone’s conviction that an invisible Welsh Male Voice Choir is following them around and when, with frightening logic, they tell you it can’t be their imagination because the voices sing “Land of My Fathers”

Lapses of memory and false recollections have to be accepted and accommodated. A mother still recognizes her son when he visits but does not see him as the same person who took her out in the car last week. This raises interesting questions of identity which Claughton can encapsulate with typical neatness

Even after being moved to a care home, the mother still asserts her independence. The care home’s list of recreational activities is quickly dismissed:

But this declared self-sufficiency has to be maintained in spite of the fact that the push button digital radio proves too difficult to use: ‘in the end, we taped everything up, / leaving you with a binary on-off.’

The title poem refers to another well-intentioned device, the Digital Dementia Day-clock which doesn’t deal with numbers but simply shows the day of the week and whether it is morning, afternoon or night. But this simplified technology does not serve its intended purpose:

As well as charting his mother’s decline, Claughton gives glimpses of her pre-dementia personality. He recalls her career as a teacher and describes her demeanour as she waded through piles of marking as ‘your default mode: exasperation’. More idiosyncratic still, he remembers her ‘teaching herself to drive / by sitting at the piano’

She did pass her driving test first time, however!

The final poems deal very tenderly with the mother’s final months, the lapsing into her native Welsh, the leaving of silent phone messages, the inconsolable agitations. These moving poems cannot fairly be summed up by a few extracts and need to be read in full to appreciate their effect.

Claughton is a sympathetic and accurate observer and a good story-teller with a facility for conveying human emotions in a few words. His descriptive language is imaginative but he deals almost entirely with actions and events rather than abstract ideas. He is not a great user of metaphor. These comments apply not only to The 3-D Clock but also to The War with Hannibal which mostly contains poems of reminiscence and observation. The title poem is a sympathetic portrait of a Classics master who is aware that Latin is declining in importance on the school syllabus

This poem is followed by a couple of pieces about another figure who might have felt himself to be out of tune with his own times – the poet Philip Larkin. Claughton reflects on Larkin’s final years when he wrote no poetry because ‘the Muse just blanked him’ and

This poem requires me to know what Larkin’s last words were and fortunately Google can remedy my ignorance. Evidently he said “I am going to the inevitable” – which, as Claughton perceptively observes, sounds rather like

Just as there are two poems on Larkin, many of the other poems also occur in pairs or trios: there are some anecdotes about a grandfather; two observations on bow ties; three incidents involving birds; and a couple of ekphrastic pieces, one of which has the particularly promising opening

I would have to say that, although they contain some pleasing touches, I found some of the personal and family anecdotal poems to be rather too long for their narrative content. The ones I enjoyed most seemed tighter and crisper. These include the Larkin piece already mentioned and “In the Restaurant” which recollects a teenager’s experience of being embarrassed by a parent.

The poet remembers that the waitresses ‘didn’t seem to care’ but has to admit ‘I’d be the one going red’ and ‘sticking my head in the menu.’  Over the, sometimes tricky, issue of getting a waiter to bring the bill, Claughton notes with some envy that a certain kind of ‘lop-sided grin / he called “a winning smile”‘ seemed to work for his father. But the poet himself has to fall back on ‘the standard gesture’

Although it reveals some of his late father’s eccentricities this is an affectionate poem. And affection, understanding and generosity are predominant qualities of Claughton’s very accessible poetry. It might be interesting however to see his future work move away from the recording of experiences and become more imaginative and speculative.