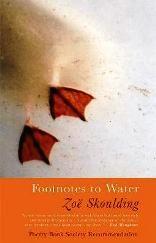 In this strange time of physical distancing and disembodied affections, I received a review copy of Zoë Skoulding’s collection electonically. To get a sense of the look of it, I checked the publisher’s site, and immediately loved the book for its front cover: an image of a duck(?)’s feet as seen from underneath, through ice. Unwise to judge by the cover? Not at all; the suggestion of a world scrutinised from an unexpected angle was more than borne out by the poems I discovered inside. More than once, I was reminded of Alice Oswald’s Dart. Like Oswald, in following the course of a river, Skoulding looks for human and natural history, but also for water’s complex ripples of association, and how these shape human thought. And these ‘footnotes’ derive from rivers very different to Oswald’s Dart; they are entirely distinctive, brand-new.

Zoë Skoulding is well-known to many readers, as poet, translator, academic, critic, as editor of Poetry Wales, as a performer, and more; as soon as I imagine I have listed her achievements, I discover another. English-born, she lives in Wales, and while she writes in English, her work is underpinned by a commitment to Welsh culture and language. Footnotes to Water, was a Poetry Book Society choice last year.

The collection is is three parts: ‘Footnotes to Water’, a sequence on the hidden Afon Adda, which flows through and under the city of Bangor; ‘Heft’, poems on sheep; and ‘Teint’, in which she focuses on the Bièvre, a lost river of Paris.

A unifying factor is the exhilarating ways in which Skoulding uses and adapts form. The first sequence is the most diverse, with, for instance, variations on a traditional Welsh seven-syllable line, a fourteen line structure, prose-poems, a collaborative found poem incorporating heard and written comments, and an interview transcript. Both ‘Heft’ and ‘Teint’ are written in a ‘step-down form’ (as described in a review by Thomasin Collins); the lines descend in two or more ‘stepped’ parts. All the poems in ‘Teint’ start with a negative: ‘not a river… not a trace… not a beginning.’ In a body of work focused on deeply serious concerns, this inventiveness offers a delightful counterplay.

Throughout the collection there runs a compelling sense of place, and of the ways in which language and place make and change each other. In ‘Footnotes to Water’ and in the later sequence, ‘Teint’, the meanings of water, and specifically of these half-hidden rivers, are fluid: the element that can cleanse and heal also carries pestilence (‘both body and murderer’), or reminds us of our own impermanence. In ‘Adda’, this restlessness emerges in wordplay; the river’s name is connected to origins (via ‘Adam’), to snakes (‘an adder… /with only the faintest hiss’), to addition and subtraction (‘a river subtracted from its/own presence’). These poems ask you to think again at every turn; words and water are equally unstable:

At times, this instability hints at a contemporary kind of alienation: the insubstantial nature of a physical world in retreat, increasingly more virtual:

There are moments of great beauty. In ‘Hyacinthoides non-scripta’, for instance, Skoulding weaves together flowers and birdsong, cuckoos and nightingales, magically dissolving the boundaries between sight, scent and song:

The prose poem ‘Haunt’ makes further, more explicitly political connections between a ‘city of interlocking habits’ and the erosion of old familiarities, driven by economic demands and concealed ‘in a mesh of daily actions’:

The collaborative and found poems that conclude this section provide a rich mulch of testimony; the flow of the river and then over and through it, the flow of human behaviour and memory. In ‘Maeyc’s Pond’, an enchanting world, now lost almost beyond recall, is lovingly recorded:

Like the Adda sequence, these poems tease out information and what comes through the senses, questioning what we think we know. Skoulding evokes the sensation of being part of a flock, poses the question of Dolly the cloned sheep (‘neither dumb nor blond’), and considers the pleasures of rumination, ending on a brilliant reminder of the Good Shepherd:

In the final part, ‘Teint’, the poet returns to a hidden river. The Bièvre, a disregarded Parisian stream, once ran close to the Gobelin tapestry factory, where its polluted water was said to affect the colour of the scarlet dye. La Bièvre is personified as an exploited country girl, poisoned by the tannery work she is drawn to in order to survive. These poems have a darker tone, a strong insistence on the brutality of environmental devastation. The river runs red with more than dye.

The sequence is wonderfully rich in literary references; like a proper Parisian flâneur, the river is haunted by them. In an epigram, Skoulding quotes George Perec on ’sea as rubbish dump…mass burial ground… stinking towns’; on contrast, later there’s Rousseau ‘botanising on the Bièvre’.

Memorably, she expands on Rabelais’ energetic imagery of the befouling of a woman by pissing dogs (a reference to the use of urine in dyeing?), and to Macbeth’s filthy hand that will ‘the multitudinous waves incarnadine.’ This water oozes, stains ‘the back of your throat’. What should quench our thirst or swill us clean is itself ruined, tainted. The sequence ends on a disturbing image of children trapped in a flooding cul de sac.

These are poems I’ve already returned to several times, poems that give more each time they are read. A hard copy is waiting for me in Italy, where I should have been in February to receive it. When times change and I can travel there again, I’ll open an envelope, hold Skoulding’s beautiful collection in my hand.