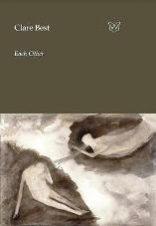 Poetry Review – Each Other: Mat Riches thinks Clare Best’s poems have some very convincing things to say about relationships

While this is ostensibly a collection about love and relationships, it feels to me that it is more about communication between pairs of people – the each to the other of mother or father to child, child to mother or father, husband and wife.

And yet for me there is a sense that this is a collection that highlights – or possibly even revels in – the everyday, the mundanity of daily routines. A quick flick through the pages of finds us observing scenes set on beaches, in cafés, bathrooms, bedrooms or gardens, or watching situations involving dogs, hugs, quiet pints in country pubs. To continue the random flicking through we can see this in titles like “My mother with roses”, “In February”, “Postcards, Cuckmere Haven”, “En suite”, “Their night and day” or “Their dog”. Even the use of lowercase in the titles adds to this sense of the everyday.

However, it’s very much worth noting that this everydayness is not a bad thing or that these are everyday poems. The settings may be, but the contents are not; they are filled with action and movement. Things either get moving from the very get-go or there is action at the start almost every poem. Again, adopting the randomised sampling approach to prove my point…in “My mother with Seville oranges” (and it’s worth quoting this in full) we’re told

There is literally so much happening in this poem, the visits, the gutting of oranges, the simmering and sinking and sealing; but then there are the questions it raises: is this a dream? Is this something brought about by Alzheimer’s disease on the mother’s part?

Either way (and my money is on the latter) there’s a care and consideration about this poem that I love, and those last two lines are as rich and evocative as any jar of marmalade. They sound as though they have the rind left in, with plenty get your teeth into and the ‘lit jars’ are a lovely image – it reminds me of the Jacob Polley poem, “A Jar of Honey” and its line ‘You hold it like a lit bulb, / a pound of light…’. However, what I like most about that image is the mother left to finish a job, and to be able to find peace in closure after the urgency of the first stanza.

While the first section of the book does involve relationships with others, a son in “Kintsugi” or a father-in-law and her son in “My father-in-law embraces my son”, at least eight, possibly more ,of the poems feature the poet’s mother, either with the aforementioned oranges or with roses, chestnuts or sweet peas.

The use of so many stressed syllables in a row in those first two lines reinforces the messages early, ramming home the lack of formality with ‘heaped loose’ flowers, and ‘small white box’ really hitting hard – a child’s coffin is a terrible thing to have to see.

The second section of the book is actually the longer of the two. However, it’s the one I initially struggled to connect with as much as the first section. Best is very clear in the acknowledgements at the start of the book that these are fictional characters, that they ‘bear no intentional relation to any real persons, living or dead, though it is hoped they may bring some to mind.’

The struggle came, for me, in warming to the characters that this section revolves around, particularly the male character. However, by the end of the section it becomes possible to have sympathies with both of them.

For a nascent couple they spend a lot of time apart at the beginning. In a pair of poems about favourite places we see them separate from each other, for example in “His favourite places: 1”, ‘he runs to summer woods’ or ‘he walks in autumn woods’ or ‘When skies are colourless / he sits alone indoors’ – that final iamb / trochee / iamb reinforcing the separation. For her in “Her favourite places: 1” we see

This remoteness from each other continues throughout this section, even in supposedly intimate poems like “Rules for pleasure” with its ‘Monthly trial positions / from the Kama Sutra’ and the male protagonist ‘Revisiting the fantasies when she’s away one weekend staying / with her mother’. This is followed by “Post-coital” which ends with the female protagonist thinking not of ‘her hungry spaces filled’ or that she ‘could plant and fell / a stand of giant oaks’ but of ‘returning to humid kitchen / after baking’ and sliding ‘..a blunt knife around / inside the tin, to free the cake, / and finds the edge of bliss.’

I was initially sceptical about this couple, I couldn’t buy into them as a pairing that needed, or even particularly wanted each other; but by the end of the section there was a love and respect there between them that is confirmed by the final lines of the final poem, “There’s hardly anything”

The spacing and lack of punctuation at the end speak volumes about a) the distances between this couple and b) a sense that there is still somewhere for them to go. It hasn’t finished.

Despite the lack or absence of conversations between the couple, what’s interesting to me is the way in which the two sections also speak to other. For example, both sections open with a focus on things that exert a gravitational pull on us, firstly the moon and then the sun in “Moon House” and “Dedication”, respectively. In Moon House (the section) there’s the night meeting of “My mother with Seville oranges”, in Each Other (the section), we see our couple in “Night Meetings”, ’The first time he found her / downstairs in the middle of the night’.

There are further examples of this to be had, but they deserve to be sought out by the reader. This is a book that is brimming with ideas, thinking, experiments with form and intrigue and, while I don’t want to do it a disservice by handing the final lines to the very opposite of these things, I think the Gallagher brothers had it right when, in their song “Acquiesce”, they sang “And we need each other”. They did. You do too.