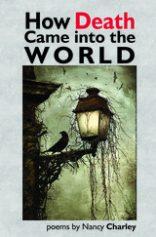 Nancy Charley’s How Death came into the World is a mix of folklore and mythical oral stories, with a strong sense of a woodland environment throughout and a focus on the animals that can be found there.

Sometimes Charley uses long chatty titles that shed new light on the poem, an example being “Why Drink Lemonade When the Lemons are so Juicy”. This introduces a character who likes to be different:

There is a sense of modern-day witchery and woman as “other”. Later in the collection we return to this concept of “weird women” or outcasts. In poem “Constrictive Pericarditis” a woman leaves the town after her partner’s death and no one notices. Later in “Reclassification”, a woman becomes a wolf. This poem seems to address an animal instinct inherent in feminine behaviour. Again in “Lifted” we meet a woman who is called by some primal urges away from her normal worldly comforts. It is suggested that this may be due to the pull of the sea’s tides or the moon. We find her having,

Whether this is a need satisfied or inflamed, the desire to be wild is plainly communicated. It becomes clear however that there is a limit to the extent of a woman’s difference or to the range of her abilities if said woman should want to be accepted as part of a community. In “Triptych”, a woman with the ability to ferment a concoction strong enough to divide a baby into two halves(!), is pointed firmly towards the next town.

Throughout the collection, Charley uses rhyme and half-rhyme to create atmosphere. And this is how she sets the scene in “No Silver Lining”,

The rhythm gives a sense of running and perhaps the inevitability of some waiting fire (A funeral pyre? The stake?). There is a sense that nature knows more than we do and having greater power. The ending perhaps refers to crows being informers for witches, bestowing earthly knowledge.

The binding thread running through the collection is the re-occurrence of poems titled “How Death Came into the World”. My favourite among these appears on page 43 where Charley suggests,

It feels surprising to me that death is discussed with such lightness and humour throughout. Perhaps this is because it is usually approached with such gravity in poetry. It strikes me that these poem-stories could be fables told to young children asking difficult questions about the way of the world.

Overall, Charley’s storytelling has a classic feel because she uses narrative structures we recognize from childhood and alludes to famous fables such as the myth of Pandora’s box. At times, however, I didn’t fully understand the book’s trajectory from start to finish. Strange stories using humour to explain how death became a part of human existence are juxtaposed with colourful memories of relationships and dreams in a way that made it hard for me to hold onto a sense of the collection as a whole. Each poem, however, felt like an exploration of a nightmare or a dream inhabited by bearded men, stallions, dragons and coyotes –which does make the book quite an apt collection of escapism for our current times!

Perhaps Charley is alluding here to the significance that we give to other lives besides our own– the idea that we live for others or that it is others who actually shape our identity by how they perceive our actions and words. Nevertheless, this closing reflectively elegiac note, coupled with the playful way in which nature and mortality are woven into the poems, makes this an appropriate collection to be reading at a time when death really is on everyone’s lips.