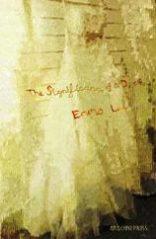 Poetry review – The Significance of a Dress: Pat Edwards is impressed by Emma Lee’s use of clothing as a metaphor for deeper human issues

Any history of fashion shows the evolution of the way humans have clothed themselves to protect, display, signify and enhance aspects of gender, role and personality. The dress is generally female territory, to the extent that it even became the symbol used to denote the female toilet. Dresses can be practical, sexy, long, short, simple, elaborate, handmade, or mass-produced. The title of Emma Lee’s collection immediately leads one to question what it is that might be important about a very particular dress, the one depicted on the cover with intriguing lack of clarity.

Lee opens with ‘I Saw Life Jackets Left on the Beach’. She hits hard and we understand that these poems are not going to be an indulgent romp through a splendid wardrobe, but will be something else altogether. The voice in the poem references perhaps one of the smallest costumes of all and tells us,

She then finds her holiday island flooded with hapless refugees whom she feels compelled to help:

Throughout the collection the poems speak of young men and women fleeing war and persecution. Any clothing they have might be all they were wearing when they were forced to leave home in a hurry; or alternatively it could be a uniform they have to wear. Lee often uses all too familiar headlines as a device for exploring the bleak reality of people who can only dream of finding shelter and safety. Lee also reminds us that struggle is historic and can occur much closer to home. Her poems reference modern America, Grenfell, the environment, domestic and child abuse, even Rapunzel.

In ‘Outside the Photograph’ Lee pulls our focus towards how “the woman’s anorak and scarves buoy her” as she drifts with her baby, awaiting rescue by coastguards.

The book’s title poem is a dark study about brides who are way too young, maybe even just “a girl in a white gown holding a teddy/bear.”

I particularly found ‘He Did/She Did’ an excellent attempt in eight three-line stanzas to illustrate the imbalance of power in traditional relationships and society’s continuing reluctance to embrace change.

Lee is keen to speak to us of the very real differences between how males and females experience the world. Previously published in the remarkable #MeToo Anthology (Fair Acre Press), ‘The Landmarks Change When You Walk Home’, lists familiar roads and junctions as a catalogue of places women might expect to find trouble, as in “Here’s the ‘Avoid At All Costs’ Underpass” or “Wolf-whistle Stretch.” That women (and maybe some men) can’t expect to walk home safely or without fear is simply a reality that never seems to go away.

One small criticism that I have concerning this collection is that the ordering of the poems lacks cohesion for me. I read it from cover to cover and longed to re-order the poems into what I could see as a more logical pattern. However, this did not detract from the power of these often troubling poems, full of memorable images that linger and taunt the reader. Just as sometimes one might think of the homeless on a bitterly cold night, so one is prompted by these poems to visualise the sea and think of how the frail and terrified cope with sea crossings in pathetically inappropriate craft, when a five year old girl has only

The significance of a dress indeed; we are reminded that both our metaphoric and real clothing undresses us all at times. This is a beautifully written collection, built upon factual information clearly gleaned through research, and all the more powerful for its use of concrete images we can all relate to and for its stark language spelling out hard truths.