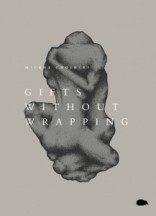 Poetry review – Gifts Without Wrapping: Stuart Henson is impressed by Michal Choinski‘s short collection of poems about human bodies and their interactions

You plunge your hand into the bran-tub of new poetry pamphlets and come up with… Gifts Without Wrapping. It turns out to have been a genuinely lucky dip. The poems in this short collection cohere around a theme of the body and its interactions, and Choinski has a distinctive and engaging voice. We’re invited to examine a sequence of relationships, not all entirely balanced and not all completely resolved. The title works at more than one level. The poems themselves are given, plainly and without ceremony, in the same way the body is given in love, unclothed, though not always, as we’ll see, without reservation.  The cover art, by Jakub Sokólski, depicts a Rodin-like embrace, and that leads you nicely into the opening poem, ‘The Prototype’, which considers the notions of perfection that govern our response to the human form. We begin, ironically enough, with a museum guide’s view of classical statuary in which

The poet goes on to visualise our guide at home alone after work, imagining different ‘body supplements’ for the statue ‘as if she were trying on different sets of gloves’ and wishing herself a marble ‘work in progress / whose promise of perfection / does not deter others from touching / the form of the idea.’

The contrast of the real with the idealised lies at the heart of this collection which relishes the sweaty and the corporeal. In ‘Doing Business’ for instance, the protagonists enter into a kind of pre-coital negotiation ‘like two totalitarian leaders / at a political summit’ bartering gifts.

The odd placement of the first comma here and the double repetition of ‘mark’ are not, I think, intentional since Choinski’s free-verse is generally fluent and confidently-cadenced, and two lines later he uses the line-break with perfect judgement:

If there’s a shrug of macho cruelty, a kind of detached objectivity, at times, it’s always equivocal. The joke in ‘The Climb’ is very much on the male speaker who’s out hiking with a superwoman with extraordinary endowments.

Choinski has a forensic, almost pathological interest in the body as object. You believe him when he says he’d love to examine his own corpse in some kind of anatomical-poetical dissection: ‘to comprehend / all somatic nuances / of how I run…’ and the body/gift metaphor finds its apotheosis in ‘The Terminus’ in which, disturbingly, ‘Her body felt / like a dead body, / a sympathetic gift / from a willing soul.’

There’s the occasional touch of grand guignol. ‘Over Kasia’s bed hung the image / of Saint Catherine’s head, / dried up, covered in red rose petals’ (‘Commemoration’). It’s there too in ‘The Liturgy of the Flesh’ which takes us pointedly and movingly from November in Poland to the Resurrection, via Signorelli and Jorie Graham, and ends the pamphlet with the enigmatic lines

So if you like your encounters salty and redolent, this collection could be for you. It found its way into print through the Hedgehog Press’s competition submission system, and on this evidence Michal Choinski deserves his break, either in Poland where he teaches and works as a music promoter, or in the U.S. where he’s published academic texts, or here in the UK.

The best way to convey its flavour is to quote the shortest of the poems in its entirety. ‘The Unwrapping’, with its synaesthesia and its sensuality and its passing reference to Blake, plays knowingly with the collection’s preoccupations, and offers them to you compacted, like a well-wrought gift: