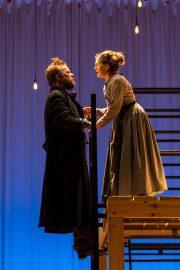 Jane Eyre
Based on the novel by Charlotte Brontë

In a heart-to-heart with the poor, plain governess Jane Eyre, Rochester tells her he once shunned his stately home Thornfield “like a great plague house”.

Brontë’s angry classic, which has for decades fired up rebellious, ambitious girls and women, has found new resonance in our self-isolating times as the National Theatre at Home allows another frustrated generation to ponder its lot.

The simplicity and directness of Brontë’s story, at once personal and generic, gives it its classic status and makes it apt for stage adaptation.

Theatricality, by definition, at home in a theatre, translates less well to a YouTube screen.

We are at once in the front row, with unimpeded visibility and no irritating sweet-rustling or coughing, and more distant and critical; it’s harder to suspend our disbelief when we are a step removed from the absorbing atmosphere created by an audience intent on enjoyment.

This is no cheap substitute for live theatre, but a reminder of what we have lost for however long lockdown endures.

The more extreme cruelty of Jane Eyre becomes dangerously close to parody, as when the pious, hypocritical Brockenhurst, one of several parts relished by Craig Edwards, tells the unfortunate pupils of Lowood institution their burnt porridge is no reason to criticise the cook but an opportunity to consider a career in martyrdom.

At the same time, the moments of straightforward humour, as when Edwards doubles as Rochester’s dog Pilot, fall flat on a self-isolated audience of one but sent appreciative ripples through the house during the original 2015 production.

For audiences anywhere, as for the novel’s readers, however, the action warms up with the advent of Rochester, played by the deep, masterful Felix Hayes as eccentric, abrupt and flawed, but fundamentally sincere and good, in contrast to the cold, cruel, deceitful villains of this tale.

The chemistry between the towering Hayes and the compact Madeleine Worrall, as a Jane Eyre so passionate she can barely utter her furious words, easily survives the transition from page to stage to tiny screen.

Given Rochester’s apparent sensitivity, we marvel at the ambiguity and therefore the cruelty of a pivotal speech to Jane that can be interpreted as a declaration of his love for her or of his intention to marry the haughty Blanche Ingram (Simone Saunders).

The state of Jane’s tortured feelings is conveyed through a powerful rendition of Noël Coward’s Mad about the Boy by Melanie Marshall.  Marshall has the part of Bertha Mason, Rochester’s mad wife, and she only sings.  She never speaks.  It’s an inspired decision that sublimates the question of the sympathy Mason deserves as an abandoned, invisible woman in a patriarchal society.

Another survivor of the shrinking of this production is Michael Vale’s strikingly simple set of wooden platforms and ladders that so effectively evokes Brontë’s attics and towers and the struggles to clamber up to them or fall from them.

In sum, even reduced to a screen a few inches wide, yet broadcast around the world, nearly everything from Charlotte Brontë’s classic survives in Sally Cookson’s boldly-directed production.  An exception is its most famous line: Reader, I married him.  Even that is there in spirit.