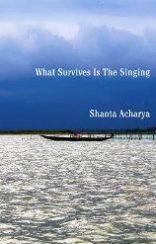 Poetry Review – What Survives is the Singing: John Snelling admires Shanta Acharya’s poetry for both its subtlety and its technical deftness

The title of Shanta Acharya’s new collection is based on a quotation from Bertolt Brecht. Brecht wrote,

These words appear as one of the epigraphs to the collection. Many of the poems here are about the sense of living in dark times and of the necessity of raising ones voice in response. This is the singing which will survive to record how it was and what it meant to the poet.

Shanta Acharya is a writer with a subtle and discriminating intelligence and an extensive frame of reference drawn from both eastern and western culture. While the claim that there are no easy answers has become something of a cliché, it is nevertheless true and a reading of these poems shows how much Shanta Acharya has, in the words of Keats, proved it upon her pulses. The first two poems in the collection illustrate the point. ‘Strange Times’ takes some of the horrors of modern life and sets against them instances of human resilience and resistance to the darkness. She writes,

The second poem, ‘Alphabet Of Erasure’ addresses what is lost when people are unvalued and ignored because of their sex, race, culture or anything else. It does not offer a glimmer of hope but reminds us that what we destroy may be lost irretrievably. It ends,

Other poems in the collection embody yet other standpoints and the range of subjects touched upon is large yet the overall effect could not be farther from self-contradiction. To elucidate this, I’d like to quote from three other writers before referring to a concept that is of central importance in Shanta Acharya’s work and gives the title to one of her earlier collections. Many writers have been aware of how the adoption of sharply defined positions limits ones awareness and ones scope as a writer. Thus Keats wrote,

For Keats, this quality was characteristic of the poets he most admired.

Virginia Woolf’s novel ‘The Waves’ is told in the voices of six characters, one of whom, Bernard, is a novelist. She gives these words to her novelist character.

As for apparent self-contradiction, Walt Whitman put it best.

This slight diversion gives some perspectives on the application to our lived experience of the Hindu concept of ‘neti, neti’ which is of great importance in this poetry and about which something should be said.

The collection has some notes at the back one of which relates to the poem ‘Possession’. That poem concerns the experience of losing things that one possesses and identifies with. It ends as follows.

In another of Acharya’s poems, ‘Self Portrait’, she writes,

In her note to ‘Possession’ Acharya writes,

Shanta Acharya’s first poetry collection was called Not This, Not That (Rupa & Co, India, 1994) so the concept is clearly central to her world view. Readers familiar with the western canon will probably recognise it as the concept with which the unknown author of the medieval classic, ‘The Cloud of Unknowing’, grapples so compellingly. When this concept is taken seriously, it inevitably has consequences for ones view of personal and worldly matters. These poems show us what it has meant for the poet and, by extension, can mean for all of us.

In the short extract that I quoted earlier from ‘Strange Times’ many people will have noticed the reference to Leonard Cohen’s ‘Anthem’ in which he wrote,

Shanta Acharya has an extensive familiarity with both eastern and western culture and draws upon it for numerous passing references in this sort of way. She does so productively and in a way that illuminates the poetry for those who get the references without excluding those who don’t. This is something that has been done by even the greatest poets. Thus, it is possible for someone’s imagination to be seized by the assertion that ‘April is the cruellest month’ without realising that TS Eliot is deliberately echoing the opening of ‘The Canterbury Tales’. For those who do pick up the reference to Chaucer, there is another layer of meaning. All of the references in this collection struck me as being of that kind.

A welcome feature of this collection is that poetic techniques are used confidently and competently where they are appropriate in the service of the poem and there is never any sense that we are being treated to a display of technical cleverness. Where an identifiable technique is not needed, it is not used. A good example of the effective use of technique can be seen in the poem ‘Woodpecker’. The poem works by contrasting the characteristic drumming sound of a woodpecker with the very different sounds of small twittering birds and the quietness that one can encounter in woods. It opens,

The repetition of ‘p’ and ‘b’ sounds, the ‘r’ sounds in ‘resonating’ and ‘reminding’ and the successive ‘s’ sounds in ‘unmistakable’ and ‘signature’ all combine to evoke the percussive quality of a woodpecker’s pecking. The poem continues,

Now our attention has left the woodpecker and we are walking looking up into the trees. There are no percussive sounds and the rhythm of the writing has adopted the andante pace of a walk in the woods. Soon we hear different kinds of bird.

Here the word sounds and line rhythms are skilfully used to place us in the middle of a multiplicity of different bird sounds.

In summary, What Survives Is The Singing is the product of a highly developed poetic sensibility which succeeds in remaining accessible to those who may not have such an extensive frame of reference as the writer. It gives us a fine example of the effective use of technical skill in the writing of poetry.