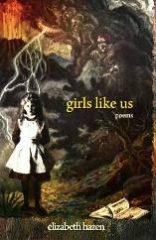 Poetry review – Girls Like Us: Charles Rammelkamp is impressed by the undisguised sense of menace at the heart of Elizabeth Hazen’s poetry

Who or what, exactly, are “girls like us”? The cover of Elizabeth Hazen’s impressive collection shows a little girl as if from a fairy tale with ghoulish monsters lurking in the background, and indeed, that is the main impression one gets from reading these ominously quiet poems. They bristle with alarm, an image of a sort of innocent Disney heroine who is beset by malevolent forces seeking to do her harm. That phrase, “girls like us,” appears in one form or another in three of the poems, always with threatening undertones. It first shows up in “Blackout,” a 26-line poem that begins:

The poem goes on like this, one uncomfortable example after another of absence, loss of awareness, loss of control, until it concludes:

This is bleak! “Girls like us” have such a fragile sense of identity. Many of these poems are littered with broken hearts and relationships gone sour, feelings of foreboding and loneliness and vulnerability. The second reference to “girls like us” comes in “Diagnosis III,” which highlights the incipient violence lurking everywhere. It begins: ‘Girls like you, he spat, / his breath laden with smoke / and Svedka….”’ It ends: ‘Girls like / you, he repeated, leaving me / a blank to fill.’ You can practically see the girl cowering in the face of the drunken man’s self-righteous indignation, taking the epithet to heart but wondering what in the world provoked it. This blankness, as if a personality erased, recurs in the third poem that alludes to girls-like-us, “Lucky Girl,” which ends,

The girl’s tenuous self-confidence is on display in the very first verses of this ironically named poem – “Everyone reassures me that I’m not / as bad as the worst thing / I’ve done….”

“Girls like us” are filled with doubt. (“The Bereaved” includes the lines, ‘It was doubt // that first defined existence. Time itself / makes no assertion.’) They struggle for a sense of purpose, crave validation in love, seek a true impression of their character. The thing is, aren’t we all like that? Hazen’s poems root out a core impulse and yearning common to so many of us, in our most secret self-assessments – in dreams, where we can no longer hide from ourselves, as if poking a sensitive tooth with the tongue to feel the pain.

The child’s game of Hide and Seek is a metaphor that recurs in these poems. The vulnerability of being alone in bed also recurs as an image, when you are face to face with your doubts (“After He Calls Me a Low-Hanging Fruit,” “Monster,” “”Taps, August 1984,” “Free Fall,” “Dream”). To sum up, the poem “Just Things” ends,

Other poems likewise have an almost roguish tone while exploring violent images. “Scene from a Horror Movie” describes a ruthless killer attacking a partly naked woman, but we understand all along that this isn’t “real.” The poem ends, ‘A gasp like hard candy / catches in my throat.’ The sonnet entitled “Why I Love Zombie Woman #6” also presents an almost balletic description of violence, from the movies. We know from the title that this is an inconsequential extra in a B film, but Hazen raises her to heroic levels. Why does she love this character?

Most of the poems in Girls Like Us are written in short, two- or three-line stanzas, which emphasize the spare, elemental quality of Hazen’s work. Sometimes they are written in rhyming couplets (“Addict”) or follow other rhyme schemes (“Alignment” – ABBA) which also tends to accentuate their direct, artful messages. In other words, there’s not a lot of clutter. She gets right to the point, the heart of the matter. And there is indeed a great deal of heart to the matter.

Charles Rammelkamp is Prose Editor for BrickHouse Books in Baltimore and Reviews Editor for The Adirondack Review. A chapbook of poems, Jack Tar’s Lady Parts, is available from Main Street Rag Publishing. Another poetry chapbook, Me and Sal Paradise, was recently published by FutureCycle Press. An e-chapbook has also recently been published online Time Is on My Side (yes it is) –http://poetscoop.org/manuscrip/Time%20Is%20on%20My%20Side%20FREE.pdf
Another chapbook, Mortal Coil, is forthcoming from Clare Songbirds Publishing. Two full-length collections are forthcoming in 2020, Catastroika, from Apprentice House, and Ugler Lee from Kelsay Books.