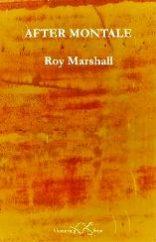 Poetry Review – After Montale: in these translations from the Italian Caroline Maldonaldo finds that Roy Marshall has achieved a good balance between his own voice and that of Montale

Eugenio Montale was born in 1896 and died in 1981 and won the Nobel Prize for Literature in 1975. He is probably the twentieth century Italian poet best known to English readers which in some ways is surprising, given the acknowledged difficulty of many of his poems and their complex symbolism. Yet the fact that they are also rooted in the real, the landscape of coastal Liguria where he grew up as a child, with recurring images of sun, sunflowers and lemons, cicadas, barren rock and violent seas makes them accessible on an immediate and physical level, as in these 27 poems chosen for After Montale.

In his Preface, Roy Marshall gives some of the reasons he was drawn to translate Montale. Both the poet and Marshall’s Italian grandfather were born in Northern Italy in the 1890s, both were soldiers on the Austrian front in World War One and both lost employment as a consequence of their opposition to fascism. The horrors of WW1 lie as a backdrop and context to Montale’s work although his poems were metaphysical and existential rather than declamatory and he wrote an essay in 1952 that attracted some criticism from fellow writers justifying his non-engagé position as a poet. Contradiction and ambiguity runs through his work even in this poem, ‘You’ with its unusual direct reference to politics:

The greater part of After Montale is drawn from his earlier work, in particular his first volume of poems, Cuttlefish Bones, although it also includes some later work such as love poems written after his wife died. The pamphlet opens with what could almost be his manifesto (or the negation of one) with its third stanza:

Montale’s verse can be harsh and dissonant, a reflection of his response to his times as well as a modernist reaction against the romanticist style that preceded him; and despite some glorious verses, many of which are in this pamphlet, they often contain a Dantesque darkness. Yet in his preface Marshall questions critics who describe his style as ‘nihilistic modernism’; he observes ‘I feel that the metaphysical emptiness to be found in them is not only experienced and recognised but also embraced’ and it is this aspect of the poet he has chosen to emphasise.

Shoestring Press have not published a bilingual edition but it is sometimes revealing to compare the original and the translation. In Marshall’s version of one of the best known and most anthologised poems ‘Sunflower’ the last stanza ends on an epiphanic note:

The final line in Italian reads: Portami il girasole impazzito di sole which in literal English translates as ‘Bring me the sunflower, crazed with light’ and Montale’s impazzito with its cutting sound together with other ambiguities in the poem can suggest a darker alternative to the one this translator has chosen.

For the translation and the selection and organisation of these poems (not chronological) are also an expression of Marshall, the poet. They are a delight to read, beautifully crafted, spare yet lyrical, as in ‘Light’ where Marshall has pared down the original 24 line poem made up of quatrains to this delicate version, bringing to the fore its reflective tone by introducing a question in the first stanza:

Marshall states as his aim: ‘to achieve a balance between fidelity to the essence of the original and fidelity to my own voice’. With this pamphlet he has brought us his version of Montale, a selection of poems that work beautifully in their own right and through which his own voice resonates. He ends with a reminder of the contemporary relevance of this great poet: