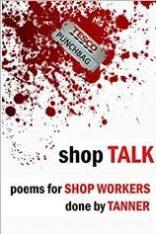 Paul Tanner has two poems in the latest issue of London Grip New Poetry. Both of them rather accurately probe the gap that sometimes exists between well-meaning (but relatively well-off) left-wing voters and the real people whose theoretical interests they campaign for. Tanner’s book is more concerned with how working people – who might be expected to show mutual solidarity – often choose to make life difficult for one another. The specific setting for the poems is a large supermarket and the collection is largely a catalogue of the ways in which customers can wear down the shop staff with their complaints and impossible requests. The book’s cover features a Tesco employee’s badge in which the shop-worker’s name is replaced by the word ‘Punchbag’.

The tone throughout is one of grim humour and one can imagine the poems being delivered pretty effectively as performance pieces. If the line and stanza breaks are anything to go by, Tanner has a good sense of timing and how to pace and place a telling punch line. But the accumulation of stories about rudeness, stubbornness and irrationality does not make for cheerfulness. The stories are mostly presented so that the fault lies only with the customer – or sometimes with management – and this could have the effect of weakening Tanner’s case for sympathy. But the book might also nudge readers into reflecting on about the way they may, on occasion, have spoken to shop assistants or call centre staff.

Tanner catches the sense of powerlessness hanging round the neck of the frontline employee caught between management and client. Versions of the following dialogue go through an indefinite number of cycles with minimal variation

The customer then embarks on a hard-luck story about being unfairly fired by the construction company and then supplies a perfect straight-man’s feed-line by asking where the exit is.

Tanner gives an interesting example of how the immediacy of a concern can magnify or diminish its perceived importance. Some of us have the luxury of enough time to indulge the dubious pleasure reading a newspaper each day and worrying about large, but relatively remote, political issues; but there are others who find such global anxieties irrelevant because

The persistently angry tone of the poems spills over onto the back cover of the book where there are (spurious) negative reviews along the lines of ‘I want more pages! I’m a loyal reader! I pay your wages! – A. Victim’. In contrast to Mr (or Ms) Victim, I would respectfully suggest that what this book needs is fewer pages. It is around twice the length of a typical collection and there is too little variation between the poems which pile up like concrete blocks in a brutalist building. The best of what is on offer here would have made a very good chapbook; but the reporting of similar incidents (all packaged in a similar style) becomes in the end more daunting than impressive. I believe, however, Tanner is making a serious point about a society which encourages people to think of themselves as entitled consumers with the right to be contemptuous of anyone who is currently serving them. (I have heard recently of threatening behaviour towards counter staff occurring in shops regarding themselves as much more upmarket than a big-box superstore.) This book should remind us that that – while we may have a certain amount of power when we are the customer – therewill always be situations in which we are the ones in a position to be bullied. One might hope that this realisation would generate some empathy: but Tanner’s poems accurately portray a contrary tendency to compensate for one’s own rough treatment by being aggressive when one gets the chance.

As I indicated earlier, these poems are – in their idiosyncratic way – well-crafted and display originality in their use of language. Now that Tanner has ploughed this particular furrow pretty long and deep it is to be hoped that he will apply his attention and his talents to other topics which will allow him to experiment with different moods and styles.