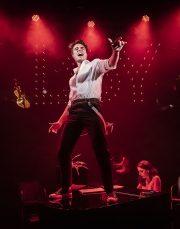 Theatre blogger Jonathan Baz, who rates this show as unmissable, writes in the note at the front of the programme that an audience can only fully grasp its craftsmanship on re-listening or revisiting.

The same can be said of all worthy art and although I didn’t want this adept, charismatic drama to end any more than I wished the lovers to fall apart, Baz’s high praise could also be construed as an apology for an affair that is too media-focused to be universal and for jokes about Ohio that may puzzle an audience on this side of the Atlantic.

For me, the most compelling concept is that love is not chronological.  Rather, it suspends in time the best and worst moments of a relationship, forged randomly and ended gratuitously.

Thus far, The Last Five Years is a refreshing break from the thousands of other show-biz love stories that lead up to a grand “I do” finale.  This one puts that moment bang in the middle in a rare duet between the singing and piano-playing couple that commits to spending “The Next Ten Minutes” together.

What is less refreshing for a woman in the 21st-century is the plot dominance of the male role, Jamie, played by Oli Higginson.  Muscular, tall and strutting his stuff in braces, it is Jamie who gets the worldly success – of a published first novel, a review by Updike and female adoration, which he doesn’t resist.

Meanwhile, Cathy, lyrically sung by Molly Lynch, has the part she never desired of being in the shadow of a genius, while she merely flunks her auditions.

But if in fiction she does not get the part, in reality, her perfect pitch wins the audience, raising the warmest laughs with the best of the lines: Ohio is worse than eating fish from last July or poking an ice pick in your eye.

Most satisfying of all, she lets us know Jamie’s novel ends up on offer at a Target discount store in Kentucky.

Throughout, the edgy lovers are united and kept apart by an immaculately polished Yamaha grand, shimmering in the spotlight as Jamie and Cathy stand on it, sit on it and take it in turns to play it – almost always separately.