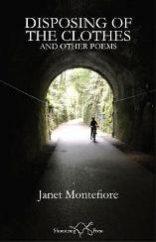 It is rare that I cry out loud on reading a poem, but this was the case with the very first poem of Janet Montefiore’s pamphlet, Disposing of the Clothes. “Dreams after Childbirth” sinks into a myth-like world, juxtaposing the visceral details of a difficult birth, ‘the too-early-born leg stirring strangely, and the controlled rush to the operating theatre’, with waking dreams of sorting shells ‘in order carefully, as when Psyche sorted her grains’. As sleep comes, the poet communes with her dead father, to tell him ‘how his grandchild was born, pouring out language not blood’; it was the ending of this poem that caught me by surprise.

Each of these poems has a form, sometimes recognisable as sonnets, villanelles or rhyming couplets. In other poems, there are forms of the poet’s own creation, such as in “The Crab and Winkle Way in November”, which comprises three octets and a quatrain, each with a near-identical refrain.

In “Cuckoo Flowers”, Montefiore exposes her art, unpicks a metaphor, as if she can deconstruct both her grief (for her mother?) and the couplet that comes to her in a dream:

Then, without striving or trying to impose meaning, there arrives ‘an image without words, exact and vivid’.

“Feathered the Bed of Nightmare” is a cumulative tale, in the form of the nursery rhyme “The House that Jack Built”, with stanzas increasing in length from an opening couplet and, in this poem, culminating in a sonnet. Readers could spend an hour unpicking this poem, or just read it aloud, and enjoy the rhythm, the rhyme, the building of images and metaphors.

Grief powers this collection; grief for those that have died, and for those that are lost in other ways. “The Wolf’s Leap” is about the poet’s son, a refrain of ‘you’ll die if you fall there’ offered when he was a child and put himself in danger, then spoken again as ‘Years later you sit slumped, your unwashed hair / on the kitchen table, hiding your face’.

There is a running theme of what, or who, you can save or must let go. The subjects of the ‘in memoriam’ poems are in the latter category; the ‘eggs of hedgehogs’ in “Shell Dreams” may yet be saved, and the facing of this poem with “Wolf’s Leap” leads the reader to draw parallels with the poet’s son. The words ‘for I could only foster / not feed him’ in “Shell Dreams” could as easily apply to the son in “Wolf’s Leap”.

My last word must go to the title poem, “Disposing of the Clothes”. This is a superb sonnet, where the octet describes the grandeur of the clothes that Montefiore’s father, a bishop, was buried in, and those that were given away. This finery is described without the awe with which those who are not the children of a bishop might describe it: his ring is ‘his bishop’s bling’; and of the clothes being passed on, ‘the cloth of gold, lawn sleeves and orange velvet / embroidery’ the poet remarks that ‘some other bishop will be glad to wear it’. After the turn in the sonnet, we see the man, not the bishop, described: ‘his baggy pullover and trousers, / not even Oxfam would have wanted those.’ It ends with the poignancy of asking the movers