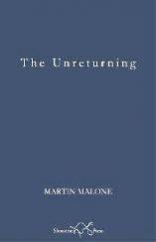 The title of Martin Malone’s latest book of verse—The Unreturning—is an elegant circumlocution borrowed from Wilfred Owen’s poem of the same name. Owen’s is perhaps the second best-known poetic response to the ravages of the First World War, the first being (arguably) John McCrae’s “In Flanders Fields”. But it is Owen’s poem that, metaphorically, puts the harder questions. And it does so in a clear-eyed and clear-headed way, unobscured by veils of sentimentality and patriotic fervour. Each of those poems has its place, to be sure, but we ought not be surprised that as schoolchildren seated in the well-ordered ranks of our desks (seated “row on row” as it were), we were seldom, if ever, called upon by our teachers to commit to memory evocations of “weak-limned hour[s] when sick men’s sighs are drained” or, perforce, “heaven with [its] doors… chained.” Heavens, no. Better that the light be trained upon “larks, still bravely singing” and the torches that had become ours to take up and “hold on high”.

It is widespread failures, and (inescapably) distortions, of historical memory that are Malone’s central concern in his book, The Unreturning. We have long lived, he would say, with a conjured mythology about war—a false record that has been cultivated and propagated to serve certain political ends. But, with the centenary of the First World War’s armistice having conveniently arrived at a time which, quintessentially, deserves to be known as the “Great Age of Untruth,” the repotting of questionable factoids about war and its lessons has redoubled and—to our great detriment—become a revisionist industry unto itself. (And a largely successful one at that.) Thus, in the book’s first poem, Malone laments “trench honesties / occluded by one century / and the paradigms of myth…”.

The remarkable poems set out in The Unreturning remind us that as the revisionists have gone about their work—sitting and reconstructing, as Malone says—inconvenient dissenting perspectives have been shed and with them much subtlety and nuance, yielding in the end a received historical take on war that deals “…only in certainty, creed and nation.” Why? Quite simply, Malone observes, because “…a nation dies when its gods are dead.”

The Unreturning is formatted in an interesting way that contributes to the overarching message it delivers. As the book’s jacket copy correctly declares, Malone has created a “Great War diptych in which the later dissenting voices… parley with [war poetry’s] more traditional elegiac forms.” The first half of the diptych (collectively, “Ghosts in the Vortex”) does indeed consist of poems, mostly written in free verse, which are conventionally presented and employ language and diction that are somewhat more typical of what comprises the 20th century war-poetry genre. The second half, by contrast, comes to us in prose poetry form and speaks in a conspicuously more modern voice. The prose poems look back (askance, even) at some of the content of the first half, offering an often acerbic, but nevertheless lyrical, commentary on real truths as they have sometimes been refracted though systematically distorted lenses. (A reviewer more au fait with the argot of our times might say that the second half of the diptych “interrogates” aspects of the first.) This second part of the diptych has, tellingly, been given the title that has been given to the entire volume, that being “The Unreturning”.

The effect of this approach to format upon the reader is not unlike the effect that a skilful and effective cross-examination of a mendacious witness can have upon a judge presiding over a trial. Important evidence revealed, under close questioning, to be little more than a tissue of lies can be fatal to the case of the party relying upon that evidence. To the extent that our modern, conjured history of the Great War and its lessons is invoked for discussion in the poems making up the first half, that conjured history does not fare well under Malone’s pointed, informed and hard-hitting cross-examination in the second. One can almost (figuratively) detect a faint scent of urine emanating from the witness box—a powerful sign that the cross-examiner has successfully unmasked, as untruthful, the deceitful testimony of a rattled and chastened witness.

The First World War’s travesties are sometimes portrayed, particularly in the first half of Malone’s remarkable collection, in all their abject ugliness. When that is Malone’s purpose, you will find no Vaseline-coated lens effects. The war’s flayed battlefield combatants are assailed from all sides in these poems—by maiming, by mortality, by every imaginable indignity—and we see it all in high resolution, just as we see the despicably asymmetrical effects of war upon participants drawn from differing classes.

And, in a dig at Wilfred Owen himself for a patch of time he spent at home in England, away from the action writing war poetry while his less privileged mates fought on, Malone does not spare the great war poet, saying:

Back on the battlefield, meanwhile, there is nothing unfolding that is fit for romanticising—no luxury of introspection about war and its “inwardness” or otherwise. No. As Malone bluntly puts it in “Clickbait”:

Like McCrae’s, Malone’s lark may too sing bravely but we are unlikely, in the Great Age of Untruth, to see mimeographed sheets of “Clickbait” being sent home in school rucksacks as verse memorisation exercises. “Clickbait” comes too near the real truth about war ever to qualify for that.

As should be obvious by now, for this reviewer, Malone’s skilful condemnation of the jingoistic revisionism that has brought the war-torn world of the present to its current precarious state rings true and is entirely warranted. We find ourselves in that predicament despite the real lessons that have been there all along to be distilled from unrefracted, unadulterated Great War history. The Unreturning must therefore be celebrated—as a powerful and important contribution to a counternarrative that is voiced too thinly by a small chorus of modern war poets in these fraught times. In a word, Malone’s war history scholarship runs deep, his writing is artful and he has a dead aim.

Like Malone, Nutter gets past the big picture with her writing—past the geopolitical, the strategic, the tactical and their attendant information management, all of which compete now, more than ever, with war’s harder truths for our attention. Both poets narrow the focus, helpfully and instructively, and bring it back to bear upon the truly personal.

While we cannot, of course, disregard the big picture, neither should we permit it—as Malone so aptly expresses it—to “occlude” the oh-so-important “trench honesties”. “Trench honesties”, in all their wretchedness, litter the ground in The Unreturning. They are set loose in Malone’s poems so that they might elbow the glory, the speech-making, the chest-beating and the spin out of the way, like a tawdry curtain, and thereby permit us to see human combat’s harsh ravages unfiltered and on a truly human scale. In the end, some of the most important of war’s lessons can only be learned fully this way, that is, when its personalised horrors are witnessed virtually at “point blank” range.

We know that millions died horrible deaths during the Great War but, somehow, the zeroes in the statistics just don’t penetrate in the same way as does the personal. Nutter reminds us, in “For Those Held Captive for Decades in Darkness”, that each of those who fought and died “…was a man once—a tall column of flesh…” and that it behoves us to remember that each, too, had a name that “…must have fluttered all through childhood like a pennant about his mother’s lips…”. This is Malone’s message too.

The Unreturning deserves your attention. Indeed, this book and its ilk cry out for the attention of all of us.