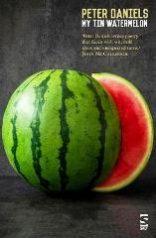 Poetry review – My Tin Watermelon: Brian Docherty takes a thoughtful stroll through a new collection by Peter Daniels – and in the process learns the meaning of “Touching Mr Williams”

This book’s title immediately alerts the reader to the fact that even though there may be personal elements in these poems, we should not assume Confessionality. Our old friend, the Unreliable Narrator, is in the building again, disguised as an openly self-identifying ‘queer’ poet living in East London. Fasten your seatbelts, we are in cruise control. Daniels’ previous book, 2016’s A Season in Eden, has the feel of a Selected Poems, bringing together work from a range of pamphlets and anthologies. Well worth a read, if at the time of reading this review, April 2020, it is available online.

My Tin Watermelon offers something different and fresh, despite, or maybe because of, some of the poems presented here being part of the course work for a Ph.D at Goldsmiths’ College. Daniels is also rightly unapologetic for, as he puts it, ‘being a creature of the poetry workshop culture’. (p.71). As someone who has spent 40 years in this ‘culture’, I say only this: what does it matter how or where texts are generated if an initial draft shows promise, and can be revised / re-written later, and we have a good Workshop or friends who can offer insightful critiques, and this stops us being lazy or complacent. As writers, we can be social and solitary. Even as I write this, Poetry News and the National Poetry Competition Winners’ Anthology 2019 drop through my letterbox.

The book’s opening poem, ‘With the Mouth’, introduces us to the voice of the poet; what he really means, I think, is ‘with the tongue’, possibly our species’ most useful, most beautiful, and sometimes most destructive tool. It is, the poem notes,

Personal, political, family, alienation, all in a few lines.

Then we are introduced to ‘Buggers’ , and a childhood in Birmingham, where

This, of course, would be some years before homosexuality was de-criminalised in July 1967, provided both men were over 21. Did someone mention the Summer of Love? We move on to ‘The Break’, and adolescence, the transition from boy to teenager, and acceptance of sexuality and personal identity. ‘Alexandra Road’ moves this personal narrative forward to student years, and a ‘bedsit’ (for younger readers, this was more limited than a ‘studio flat’) and what we are told on p.5, are the health limitations of an ‘average human metabolism’.

‘The Chime’ finds us in the Birmingham suburb of Moseley, where two lovers are surprised by a burglar, who, fortunately, leaves. The next episode is a reminiscence of life in ‘Selly Park’, while ’Days of 1985’ fast forwards to north London, most likely Stoke Newington, a mix of ‘bohemian gentry’ and ‘not-noticeably-orthodox Jewish families’, and gay men buying flats together, but also reading newspapers full of homophobic bigotry. In ‘The Cave’, we are given the details of a man’s life; furniture, books, and so much more, acquired in all sorts of ways.

Page 14’s ‘Old Beast’ is not an animal or person, but a now obsolete Electrolux vacuum cleaner, and finishes with the narrator preferring this to a ‘modern’ cordless new model.

Planned obsolescence as a metaphor for growing up or growing older? We are also introduced to back gardens, complete with cats, foxes, and squirrels, and fig trees, including one stubborn fig that might survive being chainsawed,

Oh yes, in the midst of death, there is life. As a metaphor for survival in the face discrimination and violence, this is hard to beat. The poem on the facing page starts with trees, and goes on to how life, and streets change, with grape hyacinths planted under trees introduced to the streets ten years previously, by public subscription.

We then come on to ‘What is Mr Luczinski?’ Not who, but ‘what’. We know, from the Acknowledgements to the book, that ‘Mr Luczinski’ is the poet’s avatar, a family name borrowed for at least three publications. He is ‘a licensed Londoner’, under constant surveillance in the Tube, and ‘the control room are observing Mr L’. Your Oyster Card does indeed know all about you.

‘Almost Christmas’ finds us in Docklands, on the DLR, and our avatar losing patience with three badly-behaved young men, and contemplating physical violence towards them in order

and finishes with an ashes to ashes moment, to ‘go back into after all’s been said and done.’

There are also poems featuring ‘their silent truth’, of people laid to rest in ‘Bunhill Fields Quaker Burial Ground’, and in ‘Bearded’, family, identity, and the neighbourhood changing, while in ‘Winchmore Hill’ (George Michael’s home turf), we meet a ‘tourist’ coming down to Stoke Newington on the 29 bus,

At the book’s centre is the title poem, ‘My Tin Watermelon’. Apparently, not one of those early 20th century German tinplate toys that show up on Flog It, but part of a set of Xmas decorations adorning not a tree, but a yucca plant. Mr Luczinski shows another facet of his creativity by channelling Alexander Calder,

Creativity, yes, but also a poem about lost or mislaid things, and apparently, a life lived in the same house for some time. In ‘Roses’, a poem possibly designed to offend gardeners, roses are ‘a vicious origami’, but also

Indeed, the Zen of roses. In ‘Haddock Breakfast’, we could be in Hastings, Brighton, or any seaside town,

Hackney it is not. ‘Riff on a line of Milosz’ may have started life as a Workshop poem, or assessment, but it, (or rather, the writer’s revision and editing skills), gets off to as fine start,

and explores this statement in a variety of interior and exterior locations; nothing domestic or safe here. The last stanza reads

If this is the boy who knew what ‘bugger’ meant, he has survived and thrived, in the ‘indecent city of toxic lights’. Kings Cross Station features next, while in ‘Lost Property’, we find this:

As you would; and some people might, our Unreliable Narrator takes them home. Then ‘Catalogue Man’ asks the existential question ‘How would I look in a black silk longjohns outfit?’

A detour into Horace Greeley territory in ‘Go West’ again turns the notion of ‘Workshop poem’ inside out, and yes, more sex, and again in ‘Blood’, ‘the river of being alive’. ‘Bottom Drawer’ (no puns here) is more domestic; a chest of drawers owned for many years, and now fragile, full of no longer worn clothes, ‘and a few things I’m not ashamed of but won’t make public.’

Of course, homes are full of memories, but also dreams; ‘The Dream Rooms’ takes us there, while ‘Home Truths’ features ‘the house in the woods’. Then we arrive at ‘The Usual’, life in Stoke Newington’, where the ‘usual’ is a bacon bagel, illustrating the questions of identity, belonging, community and estrangement that inform Daniels’ work.

while ‘Pears’ is a meditation on getting older, and experiencing health issues, while noting that you should always ‘listen to [your] mother’. Speaking of family, ‘A Father’s Body’ reflects on ways in which we sometimes do, or don’t, become one of our parents, and in ‘The Armchairs’ we are back in Domesticland, where homes and furniture are freighted with history and memories..

Call this bleak or fatalistic if you will, but it seems to your reviewer, to be an appropriate resting place at this point in Daniels’ and/or Mr Luczinski’s journey as a writer. As of this writing, 30/3/20, the Covid-19 pandemic shows few signs of abating, so I hope everyone reading this is safe and well.

And, as Steve Jobs used to say, One Last Thing: This is a well-produced, attractive, and well-edited book; hats off to Salt Publishing for, to paraphrase Captain Picard, making it so. Order from Salt, and help them stay afloat. You will not be disappointed.