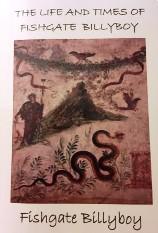 The Life and Times of Fishgate Billyboy

The Life and Times of Fishgate Billyboy: Richie McCaffery welcomes this pseudonymous fictionalised autobiography with its poetic interjections

It’s perhaps a first for me that I’m reviewing a book which already, on its back cover, carries a puff from me lauding it as a ‘triumph’. This is because this book was reprinted by its author, a British poet born in 1944 and resident for decades in Edinburgh, in order to iron out a number of printing and production gremlins. You might wonder why, first of all, the ultimate author wishes to write under such an odd pseudonym, but this is all explained in the book and is more an attempt to hide the blushes of his many friends, contacts and acquaintances than to protect himself and his own identity. However, anyone with any knowledge of the UK (particularly Scottish) poetry scene will be able to quickly deduce the name of the author and many of the cast of characters that populate the book’s pages.

Secondly, after reading the book’s blurb about a life that began in tragedy (father dead in the war, abandoned by his mother) and has been lived precariously and restlessly through a succession of short-lived and menial jobs, you might wonder why I’d describe such a book and life as a ‘triumph’. We’ve been conditioned as readers to expect the usual narratives from autobiographies – the tales of rags to riches or of the redemptive ‘I was lost but now am found’ kind. Both of these come from the ‘white picket fence’ dream of 1950s conformity, the embourgeoisement of society:

This is neither of those types of autobiography, but it reminds us of several things: that there are many other forms of wealth than merely the financial and other forms of intelligence than the intellect; and that an enriching life can be had by someone living often on or below the breadline (though this is not to glamorise hardship in any way). The mistake the middle class make time and time again is in thinking everyone in some way aspires to be just like them when they don’t, and Fishgate Billyboy certainly doesn’t. Take, for instance, the garden of his poet friend and publisher ‘Sara Jones’, who at the time lived in a suburban part of Edinburgh:

Set against a unfolding backdrop of grim, greedy Thatcherism, war-mongering Blairism, and the vendetta against the poor of our current jingoistic Tory government, Fishgate Billyboy has – to paraphrase Hugh MacDiarmid – had ‘a life worth having’ in spite of it all. The key to the book can be found on pp. 109-110:

Fishgate Billyboy is certainly true to himself, and us as well. The prose is so open and unaffected that we even hear that, for the author, poetry began in 1967 as a mistake, something he failed into when meaning to write something else. It is not only a book about artistic and poetic development, but also as importantly about sexual awakening and experience, the slow, dawning realisation of gay identity. Although there is much here of ‘gay interest’ and about the history of gay rights in the UK, it would be selling the book grievously short to merely market it as such. The writing is rarely ethereal and abstract, but rather worldly and winningly candid – we are told not only explicitly about the glories of sex and the obvious pleasure the author takes in muscly, brawny bodies, but also less desirable aspects of aging, cancer (where his surgically operated-on lower torso is compared to the seppuku of Mishima!) and of the ‘grotesque’ body. There is much heartbreak and heartache along the way too, and because Fishgate Billyboy writes in such a down-to-earth and humane way, you cannot help but be moved by, and relate to, his story. There is also a lot about the politics of the times, but not in any dull, soap-box-orator sort of way; the author firmly registers his disapproval but then demonstrates how he does not let whatever regime is in power get in the way of his life. There’s also a recurrent streak of anti-authoritarianism which I recognised and found myself very sympathetic towards. The author is a peaceful man, but finds himself in an almost murderous rage thinking about the injustices committed against him by the police: ‘It’s funny, but it is only people in authority who have elicited that response in me. I sometimes felt it at school. Perhaps it’s because there’s no way you can argue with someone in authority, so you feel much more helpless and impotent’. Again in the dole office: ‘I know myself that these government bureaucrats can be so obnoxious precisely because they have that power over you’. Luckily the author finds power in his way of life and his poetry.

This book is important, I feel, because it contributes to a developing genre. Not only is it a fictionalised autobiography rather than autobiographical fiction of the traditional ‘roman a clef’, ‘picaresque’ or ‘bildungsroman’ kind, it also belongs to a recent trend of poets writing their life stories with the aid of reference to their poetry. As such, the story becomes a road and the poems serve as markers along that winding road. In recent times I can think of Tom Pickard’s Fiends Fell (2017) and Sally Evans’s Poetic Adventures in Scotland (2014) as also being autobiographies / memoirs by poets using their own poems, though there are doubtless many more. The book closes with a handful of poems meditating upon death, and the author concludes that poetry is a more preferable belief system than religion for him because: ‘By not pretending to have any answers, poetry is much more honest and gets closer to the truth than religion’. This is one of the most frank, revealing and engaging autobiographies I’ve come across in a while.