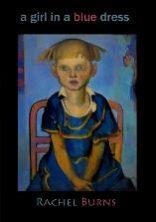 Poetry Review – A girl in a blue dress: Carla Scarano finds hard experiences open onto positive vision in these poems by Rachel Burns

A world of fairy tales, where the poet’s imagination wanders in familiar woods, clashes with a bleak unforgiving reality in Rachel Burns’ poems. The narrator’s dream of her childhood is broken by fights within her family, her mother’s mental health problems and hard times caused by poverty, teenage pregnancy and the indifference of the social services. Her creative self has to face a crude reality that constrains her to bare survival in a hostile world. Nature is menacing in the coldness of the weather and, at the same time, it is protective in the openness of the woods, which provide the space where the lyric voice finds some sort of peace. As with the Hanging Gardens of Babylon – which she visits in her imagination – nature embraces her in a protective fantastical cocoon.

The poet depicts herself like a doll, silent and still, but her house is not an impeccable doll’s house; it is cold, ‘icicles forms in silhouettes on the inside//of bedroom windows’ (“The Dolls”). Her parents fight, the mother stays in bed for weeks and the children must ‘learn to fend for’ themselves. Social services do not seem to sympathise with her family issues, ‘We’re going to take her away, ha ha! … You wicked children’ is the tone of their remarks. In a similar way, when she delivers her baby in hospital they leave her alone in labour for twelve hours and then pin her to a bed and put a drip in her arm:

The outside world is indifferent to her needs and wishes, and is even scary and aggressive at times. The contrast between this harsh reality and her internal experience of wonders in the woods and in her readings is striking. Hence, her expectations, hopes and potential are always deluded:

The woods also evoke the fairy tale of Little Red Riding Hood with its promise of adventure out of her narrow bleak world. At the same time, the Big Bad Wolf is waiting in the wild but he seems less dangerous than the hard reality of her everyday life.

The chalk-white sky connects to L. S. Lowry’s paintings. She dedicates a poem to this artist who became famous for his matchstick men and crowds in the industrial environments of the north west. His pictures were considered naive but his artwork only seems to be simplified. The poet alludes to the imaginary Ann expressed in Lowry’s lesser known drawings of doll-like figures, puppets of girls squeezed in narrow tubes and restricting outfits and also to his relationship with the young Carol Ann Lowry. They are erotic drawings (though not pornographic) and they reveal the artist’s secret side. He wished to control women as in the story of the mechanical doll Coppelia. Therefore, in a world where girls are dolls and men keep birds in cages and talk about them ‘as if they are kept women’ the poet has a hard time as a teenage mother and as a poor girl without money to pay the rent or even buy food for herself and her baby. She lives hand to mouth but her creative side does not surrender. Her readings of the Times Literary Supplement influence her writing. She yearns for knowledge, and the world of literature, as apparently unreachable as the art world was for Lowry. Instead, it is there, in her creative impulses, in the world of imagination she produces in her poetry. It is present in“Epiphany” charged with well-crafted imageries and compelling rhythm:

Here life is wisely accepted as it is, and humour livens up the girl’s epiphany. In “Fountains Abbey” the location is unusually evoked in a way that merges personal impressions, historical memories and the contingency of a family trip.

“Blue Dress” is a remarkable poem that summarises and develops the main themes of the pamphlet: the woods with their healing ‘smell of wild garlic’; the awkwardness of the patterns of the blue dress with ‘upside down umbrellas’; and her isolation, the sense of fighting alone in a world where she does not seem to fit in.

The pattern faces the wrong way as do her dreams; nevertheless, she endures, she is never completely hopeless, she is eventually proud of her blue dress, of her young self wearing a misfitting dress, hastily made. She is a Little Red Riding Hood in blue eager to know more but bound to a narrow hard life that wears her down, but not completely.

Smells fill the poet’s lines conveying a sense of life experienced through the body and yet in harmony with an intellectual vision expressed through an intimate sphere. It is in her memories, though they are sometimes harrowing, that she finds her true story, the one that made her as she is and which is the source of her creativity. Therefore, her innocent introvert self merges with her more experienced one that survived despite everything and can record her journey in her writing. It is a moving enthralling testimony of endurance and of the power of imagination.

The last poems are in memory of her grandfather who was a miner and spent his retirement ‘walking or cycling miles and miles/across the Derwent Valley’ and taking care of his bee hives. For him, ‘Honey was his cure for everything’, a sweet cure that seems to heal all the traumas and scars of the past eventually:

This ending opens up the recollection of past hard experiences and turns them towards a positive vision. Though life has been hard and the future is still unpredictable, the woods are an open space as ever, a space to explore with simplicity and bravery.