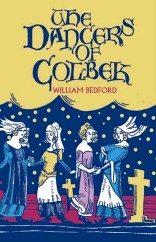 William Bedford’s new collection comes hot on the heels of his 2019 pamphlet, Chagall’s Circus (reviewed for London Grip by Carla Scarano in May last year). The central section contains poems based on the life of John Clare, which — as with Chagall — are in the voice of the subject himself, whereas the two outer sections follow Bedford’s most recent full collections, The Fen Dancing (2014) and The Bread Horse (2015), in being mainly concerned with the poet’s childhood and family. The Bread Horse described the hardships endured by his forebears in industrial Sheffield in an appropriately hard-edged style. The Dancers of Colbek, on the other hand, represents a return to the softer, rural tone of The Fen Dancing. Indeed, a number of the poems (“Weddings”, “The Railway Station at Stamford” and “The Font”) have been carried over from the earlier book and another, “Fishing”, is based on the same childhood memory as an earlier poem, “Reds”, recalling tiddlers and minnows, caught in the local river, being left to rot in a tub, but here it’s presented in a more direct, less literary way.

Unsurprisingly, given the subject matter, time is an important theme. The first section, “Slow Stopping Trains”, begins with a poem, “The Journey”, about the poet’s grandmother making the day’s journey ‘by stopping train and unfamiliar stations’ to see her new-born grandson, only to die ‘weeks later, as the bluebells came’, having been:

A connection has been forged, even though it exists as a family memory rather than a personal one. Links with the people and places of his past are key to the first and last sections of the book.

There is a sense throughout that all time is eternally present. In “Wagon & Horses”, a memory from Grantham in 1947 of hearing ‘revellers in the yard, / soldiers home from war, girls on their arms’ sparks the idea that they ‘might be back from Napoleon’s wars’, ‘ghosts of the mud of the Great War’, or ‘veterans of Dunkirk’s scoured dunes’. The fact that the revellers are heard and not seen gives wide scope for the imagination. The poem ends:

In “The Stove”, memories of a teacher reading stories to her class begin with what seems like the historic present, but by switching to the perfect tense (‘The stove has been taken away’) and back to the present (‘where you sit in your old chair, / and the stove burns coke to a yellow glow, / warming your storyteller’s murmur’) Bedford effectively turns the teacher into a ghost. Elsewhere ghosts abound (‘your ghost-walks were rare’, ‘the ghosts of summer cattle grazing’, ‘Cromwell’s ghostly riders clatter by’, ‘In leafless branches, ghosts weep’, ‘the poltergeist railing against heaven’). Places are haunted both by real people (Tennyson or John Taverner) and by fictional characters (from Sons and Lovers or The Rainbow).

One thing that marks Bedford out is his seriousness. (I don’t mean that he is humourless — there is a lot of wit in these poems.) “Laurel and Hardy”, for instance, is dedicated to Keith Hutson and has a Hutson-like enumeration of more or less unlikely-sounding acts (‘then Derek Rosaire and his Wonder Horse, / Betty Kaye with her Pekinese Pets’), but Bedford is concerned less with the turns themselves than with the grimmer realities of life in the 1950s:

Similarly, “The Railway Station in Stamford” (‘This was not Adlestrop, / and the girl waiting on the platform, / wearing a blue summer dress, / had never heard of Edward Thomas’) might lead you to expect something anti-heroic along the lines of Dannie Abse’s “Not Adlestrop”, in which the girl seen on the train ignores the poet standing on the platform, until the train is safely in motion. Instead, Bedford picks up the epiphanic ending of Adlestrop itself and applies it universally:

One of the most oblique poems in a book that is otherwise marked by its lucidity is “The Floods”, which begins:

The poem’s images of bleakness, including ‘an offering of meaning lighting stars / until dawn’s ache unravels meaning’s sham’, makes this sound like Bedford’s “Dover Beach”, facing life (and death) without faith. In “Somersby”, there is a Larkinesque church that ‘squats like a grey toad’, but the images here are darker than anything in Larkin’s “Church Going”: ‘When we open the door, the gold hurts: // black pews and blacker heaven / hidden among yews and leaking stones’. He imagines:

The central section, “The Flitting”, is a sequence of poems based on the life of John Clare in the voice of Clare himself. It’s daring for one poet to ventriloquize another, but this isn’t pastiche. Though Bedford makes use of Clare’s poetry (‘I am but what I am no wopstraw [bumpkin] cares’), the main sources are Clare’s prose writings, which included an unpublished autobiography (acknowledgements are made to Professors Jonathan Bate and Simon Kövesi, who have both written recently about Clare). The result is the sort of anecdotal poetry that Clare might have written had he lived two centuries later, though Bedford makes a feature of using Clare’s punctuation, spelling and dialect, with words helpfully glossed at the end of each poem, together with short notes, where necessary. It gains from not being laid on too thick, and gives rise to some felicities, such as Clare’s spelling of ‘horizon’ as ‘orison’ as in ‘prayer’ (“World’s End”), or ‘Mary’s watchet [light blue] eyes / watch me with sad surprise’ (“Take Your Own Trundle”). It seems that Clare was prone to delusions rather than being completely deranged, able — according to Bate — to give his fellow inmates lively and exact accounts of local trials, while at the same time being apt to think (or appear to think) that he was Byron, or Nelson, or a prizefighter. This last is captured in Bedford’ poem, “The Fancy”, where ‘fancy’ is glossed as ‘bare-knuckle boxing’, but must also be a pun on ‘fantasy’. Fittingly, Clare himself is given the last word in “John Clare’s Will”, a ‘found’ poem, adapted from the poet’s own (ignored) instructions for his gravestone.

Clare’s poetry harks back to the rural Northamptonshire where he grew up and the poems that begin Bedford’s third section, “The Moving Field”, recount incidents from his own childhood in Lincolnshire. Unlike Clare’s countryside, which was changed by the enclosures, Bedford’s had already been invaded by an American airbase. There are poems about his policeman father having to register the airmen and their families as aliens and about the poet dating a girl at the base, whose father takes exception to the book of Pound’s poems he has brought (‘“Traitor!’ flares from his mouth. ‘Mad!’”).

Bedford does not gloss over the racial attitudes of his father’s generation. He is also clear-eyed about change. “All Saints” begins:

implying that it’s solipsistic to imagine that societal changes are any more than that. Here the concerns are more practical:

And when Bedford says of the church closure, ‘They should have done it when the maypole went, / the end of praying and dancing’, he lumps religion and folklore together in a lighter expression of unbelief than that in “The Floods” or “Somersby”.

The last poem in the book, “The Dancers of Colbek”, is followed by a note describing its source — “Handlyng Synne”, a long poem by Robert Mannyng of Brunne, in which the story:

And in the “The Dancers of Colbek” itself, there is no doubt which side the poet is on:

Bedford makes the past fully present in this clear, resonant and thoroughly engaging book.