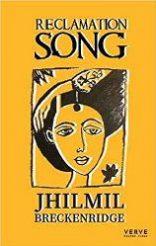 First published in India, with this UK edition swiftly following, this book contains not only poems but bold black and white illustrations by the author, which fit perfectly with the book’s narrative arc. These poems are confessional, based on the challenges the poet has faced, and her rebirth through poetry into self-reclamation. The sections of the book all have musical terms, as titles, such as ‘Overtures’ for the opening one, The first few poems are about death, giving glimpses of the brightness of life, but with a sorrowful tone which acts as counterpoint to the pleasures. The topic shifts to poems about birth. In ‘A Few Lies About My Birth’, by making everything opposite to how it should be, the poet reveals what was amiss:

Telling it slant, like this, removes any trace of self-pity. The sorrow is there, too, in the following poems: a distant though beautiful mother who makes the daughter feel lesser and unloved; a mother who does not warn her daughter about predatory men.

There follows an interlude of joyful travel poems, full of sensuous imagery and gorgeous colours, falling in love and wanton nights, but these still speak of not fitting in. One poem that touches me, ‘Just Call Me Jill’ reveals the unthinking attitude of strangers who struggle to pronounce her name, ask inappropriate questions about which language she speaks, are impressed at her excellent accent and call English their language, therefore excluding her. She is passive, but really wants to challenge them:

This poem makes readers question their own unthinking racism, without sounding like a rant or an accusation. Breckenridge is never preachy. Instead she subtly raises the reader’s awareness, and provokes thought.

One of the most powerful sections is ‘Chorus’, in which there are poems about marriage turning sour, coercive control and treatment for the mental health problems this situation causes. ‘Button’ concerns the use of drugs to make a woman compliant. It reminds me of the Sylvia Plath poem, ‘The Applicant’. It is just as chilling:

The poem is written in short line couplets, to suggest how simple and effective the drug treatment is, as far as the male doctor and the husband are concerned. That last line as a single one suggests both are happy with their solution – but the wife has no say, no voice, except her thoughts as recorded in the poem. The following three poems lay bare the horrors of treatment in a mental hospital. ‘Treatment’ includes repetition to show how dull the days can be when there is nothing but medical procedures to occupy the mind. The smells and sounds of the hospital create a sense of dull horror, as though the speaker has given up. The doctors are arrogant, think they know what’s best, but the word ‘treatment’ acquires a second layer of meaning, punishment. The patient has lost everything: her son, her clothes, her identity and any say over what happens to her. ‘Staring’ has ‘because’ as anaphora, to show the relentlessness of the days, where the only relief is gazing out of the window and dreaming of freedom, the desire to shower without being watched. The fear of the ECT equipment and the litany of drugs used, counterpoints the longing for fresh air, the sound of children playing, to contrast normal life with this place of waiting for release.

The narrative arc has hit its lowest point with these poems, but it begins to rise again. ‘Leaving’ is written in the voice of someone questioning the poet about leaving her husband. There are mixed feelings towards the husband: ‘he, who wanted to grow old with you’, but when the reader learns of some of his actions: ‘did he poison your parents against you?… auction all your belongings… when he kidnapped your children?’ then the reader understands she had no choice but to go, so she could be herself and not the person he was forcing her to be. ‘Respectable Women’ is about the different selves the poet has been, which strikes a chord with any reader. ‘A Hundred Tastes of Me’ is on similar lines, but structured differently, this time making anaphora the central feature, repeating ‘I am the…’ to make a fabulous list poem exploring identity:

The pattern breaks at the end when she includes the reader. After the darkness of the mental hospital poems, this one feels as though the sun has come out. All the images are positive and move across gender, age and other things, focusing on what it is to be human. The title poem, ‘Reclamation Song’ concludes this section, with a strong pulse and message, to accept oneself fully and rise above critique and societal norms.

The final section, ‘Refrains’, reaches past personal experiences to wider ones, criticising unfairness and oppression in current times and ranging widely in topic, place and form. Breckenridge copes brilliantly with form, for example she can work in ghazal and villanelle, as well as handling free verse with skill. Each poem gets its voice just right. This is an assured and polished debut, and I fully recommend it.