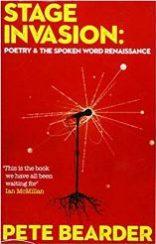 Stage Invasion: Angela Topping takes a close look at Pete Bearder’s guide to spoken word poetry and its differences from poetry for the page

I was keen to read this book because I do not see myself as a spoken word poet, but a page poet who happens to be a good performer. For a long time, I have been curious about the apparent distinction, and wanted a clear definition of what, if any, the difference is. Bearder sets out his aims and a summary of his chapter topics in his lucid introduction. This book is an academically rigorous but nonetheless readable attempt to set spoken word into its context as part of the oral tradition, or descended from it, like the collective text that has the name of Homer attached to it, but is unlikely to be authored by one single person.

He mentions Rebecca Watts’s scathing review of Hollie McNish, which appeared in PN Review, and uses it as an example of where the academic world makes a misstep when it tries to evaluate spoken word poetry. It divorces it from its performative context so that the full effect cannot be understood. Many performance poets are now bringing out books of their work – though their ideal reader may be someone who has already seen and heard them. But it is easy to critique just the words on the page and Bearder says that to remove gestures, audience rapport and tone of voice, is to judge only part of the text. In contrast, so-called page poets expect their work to stand alone, and work on the page. This may be one possible difference between the two modes of writing – although we all rely on selling books at gigs and readings.

There is no faulting the wide range of references Bearder draws on: everything from the increasing number of academic texts being written about the growing popularity of spoken word, to interviews and analysis of slam results. This makes his book authoritative and a fascinating excursion into the context of the art. In Chapter One, he gives his own journey into the world of spoken word, from his early struggles to his subsequent successes, of which he has had plenty. This could be very helpful for anyone wanting to take up this life.

According to Bearder, slams were started in America in the 1980s, by a socialist poet called Marc Kelly Smith, whose aim was to ‘invigorate poetry events by allowing the audience to challenge pretentiousness and complacency among the poets on stage’ (Smith and Eleveld, The Spoken Word Revolution, 2003). A slam event is not guarded by gatekeepers; anyone can turn up and put their name down to perform, the audience is the judge. However, Bearder does not see slams as democratic utopias. They have become a way of getting validation from others, of much the same kind that results from having a book published by a reputable publishing company. He looks at the positives and negatives of slams, the latter including the lack of critical feedback and the competitive element,. He points out that poets who made their name through winning slams tend to stop slamming when they become well known, and also that established poets tend not to take part in slams because they don’t need to. Further negatives include writing to a winning formula, and an element of game playing. Also, there are not enough slams in the UK for a performance poet to earn a living from them, so they must seek other income streams. I personally dislike slams because they often require noise from the audience as part of the judging process, and I find that unpleasant, just as I do pantomimes. Bearder relates slams to the carnivalesque, which is apt. He does see that slams will continue to evolve and develop the democratisation of poetry and how it is received. He also roots slams in their historical and multi-cultural context, from the Celtic ‘Flyting’, to the Aitysh poets of Kazakhstan and Kyrgyzstan.

Chapter Two aims to offer a definition of spoken word poetry. This is a tricky area because there are many different views of it. Bearder examines ways it descends from the oral and bardic traditions, and ways it does not. The differences he points out include the lack of a definitive version of a text in the oral tradition, and the fact that, although oral tradition texts do include lists, they are driven by narrative, whereas the purely list poem is a common way of writing spoken word texts. Since we are all surrounded by a literate world, it is impossible not to be influenced by literature, whether or not one has a literary background. This is an excellent point. He relates this to spoken word shows, which often are performed by one person, are quite ‘low tech’ and break the fourth wall. These are a blend of theatre and poetry. The poet Martin Figura, for example, has had excellent success with his shows, and has performed both Whistle and Dr Zeeman’s Catastrophe Machine at StAnza in Scotland, a high profile international poetry festival. (This is my example, as Bearder does not give any at this point). Bearder makes a careful distinction between slam poetry and spoken word, because a slam is not simply a reading/performance, it is also a competition, with time limits, rules and judgements which are not applied to performances in general. Bearder comments: “there is undoubtedly a risk of spoken word creating a pastiche of itself through slam; one that indulges in bathos at the expense of art and pyrotechnics at the expense of subtlety”. He also traces what performance poetry owes to rap and hip hop. and cites many more influences which are more relevant to the US.

In the UK, performance poetry owes much to poets like the bardic Dylan Thomas, whose writing style is highly performative. Bearder also rightly cites the Mersey Beat poets, who owed much to the music scene surrounding Liverpool at the time, with the explosion of The Beatles onto the world stage. McGough, Patten and Henri were all talented poets, but who were writing in a fresh new way and performing their work in clubs and pubs, but who were also included in the prestigious Penguin Modern Poets series with their own volume, The Mersey Sound. Bearder laments that the range of spoken word poetry seems to be narrowing, citing the marvellous range of performance poets who became massively popular but have their own distinctive styles and traditions, such as John Hegley, Jean Binta Breeze and Lemn Sissay. He quotes Hanna Silva’s analysis of the direction spoken word poetry at slams is taking, where some tics of delivery have become clichéd. This is the danger of winning formulas and game-playing.

Bearder goes on to analyse further influences, for example Kate Tempest taking rhythms and declamatory style from the US Black preachers such as Martin Luther King. He looks at ethnic inclusivity in spoken word poetry, one of its strengths, and its consistent trend towards left-wing politics, another strength. He would have written more on other forms of inclusivity (age, gender, disability etc) space permitting, in what is already a large volume, but does include findings from his research in the appendix. The topic of inclusivity deserves a volume of its own, and so he leaves room for someone to develop his research in this area.

Chapter Three offers a rundown of movements in poetry, which is an excellent summary and reference point. He also gives the dates of these movements and the names of their key practitioners. He begins with the Romantic Movement, and I think he is correct in framing this as a popular movement, because it draws on folk culture and some of its poets were working class. He mentions Blake and Keats but sadly omits John Clare, who wrote in Northamptonshire dialect and drew on music as well as literature. Bearder moves through Chartism, Modernism, The Harlem Renaissance, British Beats and the Liverpool Poets, The Black Arts Movement, Dub Poetry, Hop Hop, and UK Alternative Cabaret. For each heading, he traces how it started, its aesthetics and its key practitioners.

Chapter Four looks at the role of social media and poetry promoters in spreading the word about performance art. In his usual meticulous manner, Bearder dissects the importance of a poetry community and discusses how to build one. He recognises the support of the audience too, in turning up and in buying CDs and books. He gives credit to promoters and poetry activists, whose work doesn’t merely involve organising gigs, but promoting them, putting up and looking after the speakers, compering, and having the idea in the first place. It is particularly tough to organise and run a lengthy series of monthly events. As well as appreciative audences, Bearder also stresses the value of ‘informed critics’. The need for a critical conversation around spoken word is seen as crucial, so it can attain the status it deserves. He mentions awards and prizes such as the Saboteur Award, which includes a spoken word category. The recent news that the T.S Eliot Prize was this week awarded to a Dub Poet, was too late to be mentioned in the book, but it is exciting that these prizes are broadening out. Between chapters four and five, there is a section of photographs related to the chapters in the book. These are fascinating and helpful.

In Chapters Five through to Eight, Bearder is interested in how spoken word poetry is written and how it is performed, how it affects the writer when he/she performs, how spoken word artists use their body and eyes to communicate the poem through performance. He is also interested in techniques: the rhymes and rhythms which work on an audience, how the voice can vary in timbre, pitch and volume. He also discusses the joy that comes from both writing and performing well. This part of the book is an excellent handbook on how to be a good spoken word poet.

Bearder’s advocacy for performance poetry and spoken word is persuasive, and his own passion evident. He says as his final word: “Spoken word is not an emerging, marginal or amateur practice, but a mature and complex cultural asset with its own canon and fields of expertise.” In his appendix, before his vast and impressive biography, he includes a write up of the Hammer and Tongue National Slam Final, at the Royal Albert Hall, 2018, analysing it under helpful headings.

This book is a fascinating and readable, yet academically rigorous work, which I would advise everyone to read. It would make an excellent set text for a Creative Writing degree course, or for anyone who wants to be a better writer and performer. It would be particularly helpful to anyone who wants to sharpen their practice in slams and shows, or wants to break into the performance scene.