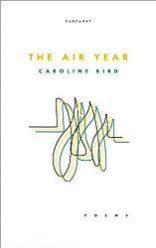 Air: we’re surrounded by it; sometimes crave it, saying we’re just going out for some fresh air, or that we need to clear the air. It isn’t until the sixth poem in, that we find out that The Air Year of the title refers to the time before a marriage; the time before anniversaries are marked as paper, cotton, leather and so on. The Air Year is nebulous, undefined, free, without bounds and structure. Or is it a time of huge confusion and emotions out of control to the point of jeopardy?

Bird counts in the reader with her first poem ‘Mid-air’, taking the conductor’s baton, pronouncing the “‘And’/ before the ‘one, two, three’” so that we are all held in the suspense of that opening moment. Then we are suddenly plunged into a piano bar in a cellar where an innocent girl encounters “a host of swaying women” and the prospect of “A Private Kiss”. The poem morphs repeated words, phrases and ideas as if the ingénue in the bar is slowly getting drunk or high. The reader is drawn into “all these/ dark dissolving spaces” and the fear is tangible. We might be reminded of ‘Warning to Children’ by Robert Graves, where the poet plays with a set of images, one within another, in a riddle of impossibilities. Bird’s reference to stairs, mouths, doors, walls and secrets is reminiscent of the same strangeness.

The absurdity prevails in the deeply sexual ‘Nancy and the Torpedo’. We don’t know whether to laugh or cry and probably do both as the character screams “I’M SORRY I’M NOT A FUCKING TORPEDO!” at a lover who claims to be “exploding for the both of us”. No wonder the next poem, ‘Sincerely’, strikes a note of caution, “I’m done with healing /over like water heals above a sinking body”.

There are plenty of references to death, sexual or otherwise, in what follows. The poet embarks on a mesmerising exploration of dark thoughts and perversions, leaving a crime scene “chalk outline of a woman / who did not jump.” In ‘The Red Telephone’ we encounter the lover who constantly cries wolf, with her pathetic list of dramatic, desperate scenarios, none of which elicit the desired response.

The reader can sense all the worst human conditions: loneliness; madness; “the taste of nothing”. We know things are bad when we can no longer recognise solid ground, think “you’ve survived, falling, landing, falling out /…Thud”, and supposed love keeps coming at us “a patch-up job cobbled in mid air”.

‘The Girl Who Cried Love’ is a long prose poem, riddled with dialogue, like a modern-day fairytale or a Disney film on Ketamine. Where else could we trip over a stone doormat “with ‘welcome’ scratched into it with a penknife”, and the declaration “I felt my clitoris stabilise for a moment”? As readers we could just be wondering whether this has all gone a bit Game of Thrones, when Bird plays with being a falconer – oh, the irony – but she recognises “my glove is wrong /and you are not a falcon”.

There are many filmic episodes and references, scenes played out like nasty but compulsive American box-sets. “Who wears her new husband’s dead ex-wife’s earrings /to the christening” is at once a delicious trailer and a horrific glimpse at someone’s reality. ‘Napthalene Heights’ is the poet’s genius name for a “a completely normal hotel”(yeah right!) in a poem about meetings and partings. The sense of loss is compelling, expected and heartbreaking.

As well as prose poems, Bird gives us sonnets and couplets, and there are poems where we are thankful for some respite from the chaos. In ‘Circles’ we feel the writer gaining an understanding that some loves require time, lots of it: “when we’re old and beauty’s embedded in / your face, you won’t say ‘sorry it took ages’”.

At last we move towards ‘Rope Bridges’ and ‘Sanity’; there is “a real love plus / two real cats”, could this be normality? Well, it could, but not before we’ve been reminded how conservative ‘Little Children’ are and that “parents aren’t permitted even the smallest perversion yet a child / can secretly urinate in a drawer for three weeks / until the smell warrants investigation”.

Oh God, and then ‘Emotional Reasoning’ – what is this? It’s like an excerpt from a suburban horror novella, mixed with American gothic. We want to like it but it’s just too weird and we feel a bit scared if we’re honest. We’ve probably just been lulled into a false sense of all being well when, in reality, it’s all starting again, the lust for love.

In ‘Morality Play’ we sense a turning point, but have we been here before? Once again, the poet is trying to work it out. “Are we in a game or a dream?” Her conclusion – “some fucker/ was recycling me!” Yes, that’s it, the cyclical falling in and out of love, even more important than the perils of “using plastic bags /or burning diesel”. The recycling continues in ‘Fancy Dress’ where the device of morphing words and ideas is perfected in an ever-evolving fashion show of costumes to suit every eventuality: “a nightmare in a reality costume”; “Time dressed as a decent amount of itself”; “Air in a tension costume, /Distance in a space between us costume.”

And so to therapy in ‘The Tree Room’ and to kidding ourselves things are improving when it’s probably a “manic lying spree”, because in ‘Loveborough’ “we don’t end romances we let them overlap indefinitely until we forget their names”. So, is the final love in the book “not like the others”, and can “two heart strings / fumbling to combine” bring peace and resolution? We hope so.

Caroline Bird is a poet like no other, always prepared to shower us in meteors of linguistic playfulness, in a frightening game of hide and seek. We don’t always need to understand every explosion of emotion to feel the power and passion. These poems are screenshots, epic movies, ground-breaking nuggets of prose, and something else we can’t even find words for. The Air Year is a fantastic, intimate, disturbing and beautiful tour de force.