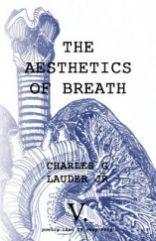 Poetry Review – The Aesthetics of Breath: Pat Edwards finds rewards in the unfamiliar perspectives from which Charles Lauder’s poetry is written.

I don’t know if there is such a thing as writing from a male perspective, and I may be shot down for suggesting that this book feels like that to me, but it does. There’s nothing wrong with that, of course, but I sense some disconnect and I had to work very hard to read my way in. I also found myself having to research many references, some quite obscure, in order to feel included as a reader. That aside, my work was usually rewarded, and the poet did make a certain impression with his collection of poems reflecting different stages of life lived on two continents.

Lauder is comfortable in many poetic styles, giving us poems laid out in sequences, long prose poems, and poems in more conventional stanzas. Punctuation is frequently omitted and replaced with double spacing or deliberate indentation from the margin. The focus is often family life, that known to the poet or observed, with a political and social backdrop spanning different decades. The opening poem ‘Sir Walter Raleigh of Bexar County, Texas’ is a good example of this, where the poet appears to be showing his grandchildren where he grew up. Lauder tells us “a fear and hysteria grips kidneys/ so hard no one can piss/ without a loaded pistol in hand”, as if to comment on how America has changed.

Next Lauder takes us to Bern in Switzerland, where a newly-married Einstein is busy at his scientific work. “His hands fly across the page”, whilst by contrast his wife is gently sewing, “the slow movement/ of her needle pushing in and out”. Lauder appears to be commenting on how time, personal and historic, can play tricks, much as it does in Einstein’s famous theories.

There follows a series of poems examining famous figures including Napoleon, Jimmler and Isidora Dolores Ibárruri Gómez, Basque heroine of the Spanish Civil War. In these poems we are reminded of the ‘other’ lives of characters often depicted as madly busy with political causes, war, and evil mayhem. There are other poems here that chart violent occurrences, the seizing of land and power, injustice.

Lauder then turns to what feels like more personal recollection, poems of early loves, friends, formative experiences. I rather enjoyed the grandfather who takes his grandson out for ‘Blueberry Pancakes’, “five the size of LPs turn up/ on his plate”, only for the disappointment when “he’s suddenly stuffed”.

The poet describes difficult moments in life such as in ‘Time and Distance’, when a father says of his son “maybe/ he’s more than I ever could be”.

The collection closes with a twelve part depiction of stages of life, ‘The Aesthetics of Breath’. In ‘1: Inhale’, a parent says of an expected child “I couldn’t see how we were going to fit him/ into our lives”. Life is depicted as commonplace and domestic, with inevitable mundanity. In ‘7: Dirty Laundry’, a couple facing old age find “fifty years of avoiding an argument has finally burst”, and in ‘12: In Our House’, the man sees “it is my duty/ each morning to ignite this house”.

As I say, this was never an easy read for me; but the careful building of these poems into a logical order, the vivid depiction of transient lives, the insight into social and historical events, was competent and challenging. The strength and beauty of some poems more than made up for lapses into the esoteric and, as reader, I felt gifted with the surprising perspective of man and father.